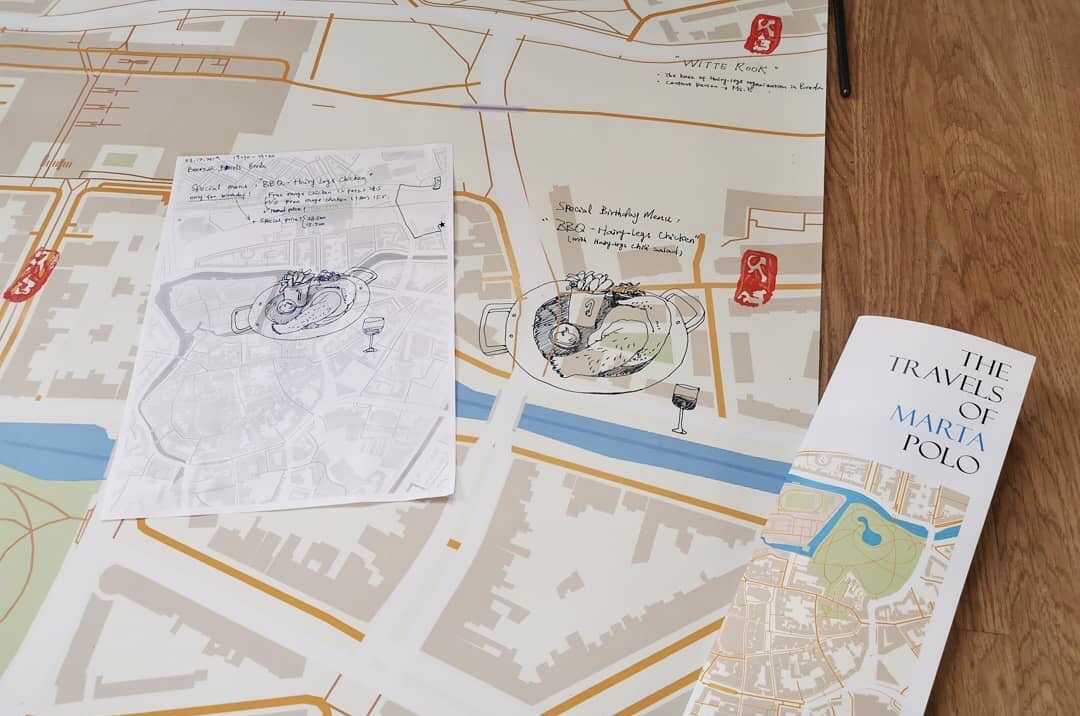 The travels of Marta Polo: Malaysian staff and birthday menu

There was a mysterious Malaysian agent in Breda, code-named F. On my birthday, I asked her to have dinner with me. We came to a restaurant close to the train station. F revealed that this restaurant has a hidden menu especially for birthdays. I was curious and decided to give it a try. We were both astounded when the dishes came. It turned out to be a roasted hairy-legs chicken! The chicken’s leg hair was not removed, and after roasting, they were still standing on the greasy leg. I hesitated if I should eat the hair as well, so I looked at F. Without hesitation, she pulled off a big piece of skin and hair, put it into her mouth, and chewed it up with satisfaction. There was also a salad, which was said to be made from Breda’s local hairy-legs chili. F said maybe I could find it in the botanical garden of Begijnhof.

The botanical garden of Begijnhof

Begijnhof was close to the city park. Walking along the winding path of Valkenberg, you could see a group of buildings surrounded by brick walls. The cross was standing at the top of the church inside the wall, which was very conspicuous. When I entered, I immediately saw the botanical garden, but in winter, most of the green leaves withered, leaving only a dark brown land. I searched carefully in the garden, and finally found the hairy-legs chili. Its fruit was red like ordinary chili, the unique feature was its shape—human leg. The fine leg hair grew on its smooth surface, looked fluffy and adorable. I took a picture of this rare plant, which I thought I would never see again after I left Breda.

The controversy over human products

On a clear day, I crossed Valkenberg to the center of Breda. There were so many pedestrians on the street I had to watch my step. I didn’t have any plans, just to wander around the shops. On a street, I met a group of people holding signs and shouting something. I stepped forward curiously and saw that the sign they held said “against human products.” In recent years, the question of whether the use of ‘human products’ should be legalized has aroused wide controversy around the world. Supporters believe that humans are also animals, and that since animal products can be used, it might be more environmentally friendly to use dead human remains rather than cremate them. The opposition argues that it is morally and ethically unacceptable in the first place, and that it risks triggering a series of social problems.

Later, I saw a hairy-legs carpet in the corner of a boutique. Although it looked real, when I touched it, I found it to be only an artificial product. I don’t really have any opinion on this problem, but, I, at least, don’t think I’d want to step on a bloody human skin rug.

At the beginning of this text, I mentioned that we call the process of transforming to a hairy-legs ‘Awakening’, and the arrival of Awakening is unpredictable. Usually, it happens when an ordinary person suddenly sees a magical scene he/she has never seen before. For example, on a moving train, a naked ticket inspector walks the entire carriage casually, and the surrounding passengers do not seem to notice his strangeness.

Just recently, I was fortunate to witness the moment when an ordinary person Awakened to a state of hairy-legs. It was my friend Miss D. At that time, we were visiting the Grote Kerk in the center of Breda. I pointed to the uneven pattern on the ground and asked her what it was. She said it was a tombstone. This aroused the interest of both of us, so we started looking down at the marble floor of the church. Suddenly, she said that she seemed to see a hairy leg carved into the marble floor. D was very confused because she had never seen such a strange tombstone. I patted her on the shoulder and said sincerely, “Welcome to the world of hairy-legs.”

One weekend, I took the train crossing the Dutch channel. I got close to the window and stared at the deep blue water expecting to see a hairy-leg fish jumping out. Yes, hairy-legs creatures do not exist only on land. However, there is very little literature on aquatic hairy-legs at this stage because the opportunity of encountering them is rare. I did hear that a few months ago, an agent saw several hairy-legs river crabs on the beach. I can’t help but wonder if they were as delicious as hairy-legs chicken?

Ms. E gave me the task of doing workshops for the children after school. They needed to make some works for the Breda cultural night at the end of January. Actually, I had no idea about kids. Fortunately, Ms. E and Miss M, the person in charge of the school, helped me a lot of the work. After a few tries, I gradually became familiar with the children and must say that they remained perfectly cute when they focused on painting. A little girl named E drew a hairy-leg fish on her paper, which surprised me. I never thought this kid could be a hairy-legs. E seemed to like me very much, and drew a picture of me on paper. I attributed this love to some kind of telepathy between the hairy-legs people. In any case, the time I spent with these children was utterly happy and inspired. I sometimes thought, maybe—in another way—they were also my mentors.