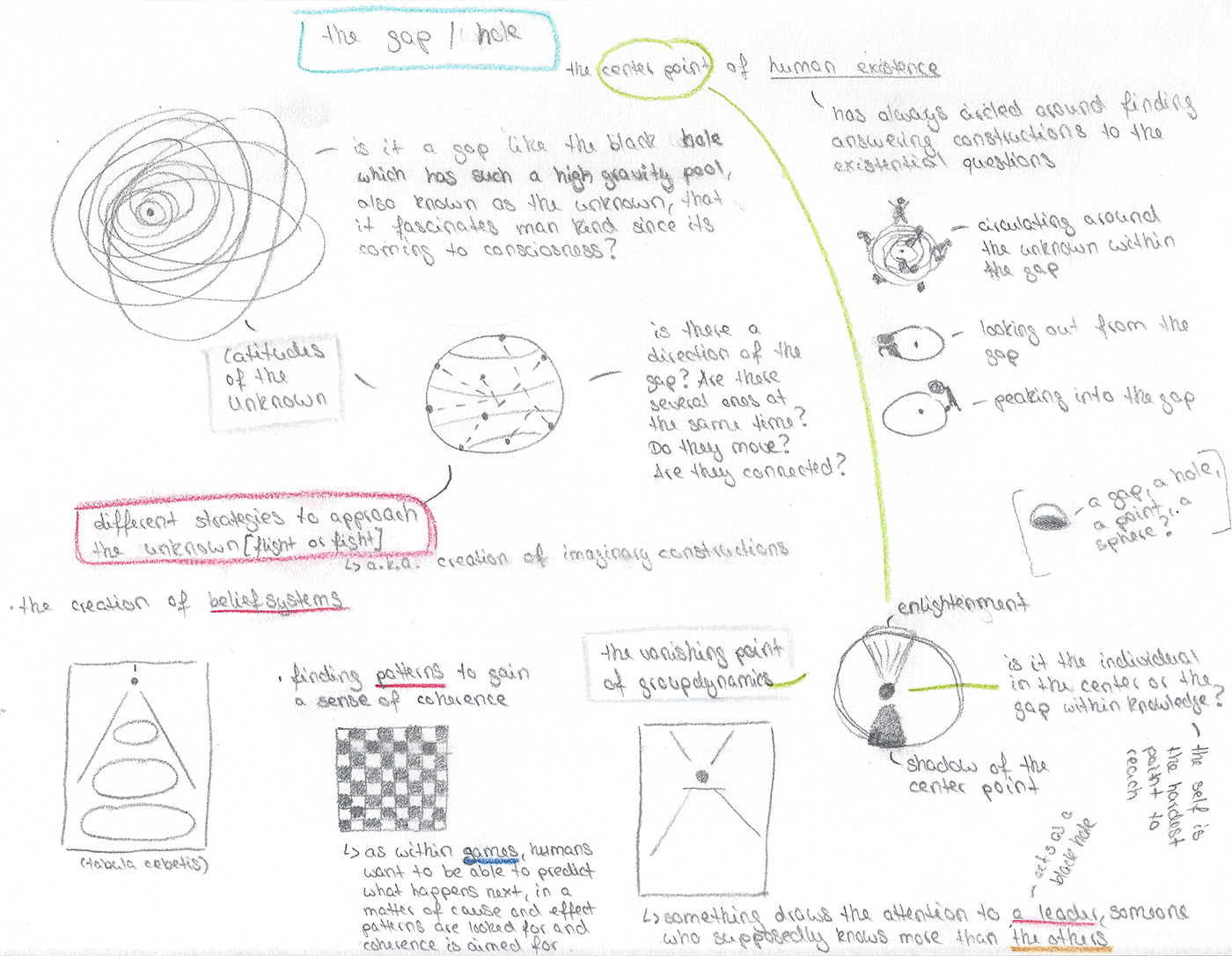 This is the first of a series of explorational essays. With them I am aiming to connect the dots of my artistic practice and research endeavours.

Committed to a society of the future: – where it is irrelevant for the obligation, if we ourselves arrive at this society, or if it will ever be achieved at all; the proximity or distance of a goal, as long as it appears as such, does not change our direction.1

Watching movies with my mother was a game of naming the impossibilities of the fantastic actions. “This is impossible in real life!” – “Das geht in echt garnicht!” – became the automatic diagnosis in the back of my mind. This approach was naturally exerted upon happy endings, since the movie might have ended but real people’s lives would go on. It made me think further on how these narratives might continue, making up various possible scenarios based on the characters’ individual complex struggles.

The narratives we grow up with, and which are inherent to the cultures we are surrounded by, are influencing us throughout our lives. Diving into other people’s worlds and approaches towards living is something I continuously lose myself in, always looking for who I am in relation to who they are, the narratives that shaped their realities, and in what ways they could develop. It is a form of escapism, research for my artistic practice and way of living at the same time. To me, it appears to be the road towards self-determination, continuously discovering and aiming to gain a grasp on how people want to live, what common existential needs there are, and which infrastructures and structures of meaning2 are truly necessary.

Structures of meaning are the narratives within cultures which give us humans the tools to make sense of our surroundings and actions. Within social interaction we categorise each other, nurturing social belonging while distancing us from one another by creating a ‘we’ opposed to a ‘they’.3 By categorising the other, counter-moves are being developed and the open field of interacting and encountering becomes limited. A shift from a counter-movement (defensive, vertical) to an encounter-movement (open, horizontal) creates space to move together in differences and disagreement, wherein one can co-create a situation instead of merely reacting to it.4 An encounter-move occurs as an experience of transformation, not tolerating coercion and control – “I experience this other, which transforms me.”5

It might be impossible to transform our structures of meaning, yet the experience of an encounter allows reinterpretation of what we already know. Max Frisch beautifully describes, in the opening quote, that the goal is giving direction without necessarily needing to be achieved. It reminds me of the phrase “For the cause” – “Für die Sache” – which was frequently used by the RAF (Die Rote Armee Fraktion) during their trial in Stammheim.6 By using counter-violence they were aiming to fight the violence of the state, trying to spark a socialist revolution. To me, this phrase has an aura, a strange halo of something seemingly more important than oneself while finding self-determination through it.

When I moved to the Netherlands to study at the art academy in Breda, I started diving into my personal and German history. The physical distance I had created brought everything closer. This individual rebellious move created a void and got me obsessed with so-called terrorists escaping their former lives in order to fight “Für die Sache”, like the RAF or Ted Kaczynski (The Unabomber), and the evolvement of power vacuums after a revolution has brought forth the fall of a system in power.

A power vacuum develops when the goal of the revolution is the revolution itself, a short-term liberation of the situation one is situated in. The tendency is that a void needs to be filled or an unbalance needs to be brought back to a state of equilibrium. With the example of a revolution in mind and the power vacuum afterwards, narratives about and strategies to obtain the wished for world are indispensable.

“[…] if this world keeps going, it’s largely owing to everyone’s material dependence on the smooth general operation of the social machine for their survival. […] For a revolutionary force there is no sense in its knowing how to block the opponent’s infrastructure if it can’t make such facilities operate for its benefit if there’s a need. Being able to destroy the technological system presupposes that one has tried out / implemented the techniques that make the system superfluous. Reinhabiting the earth means, to start with, no longer living in ignorance of the conditions of our existence.”7

Looking back, I can see that I needed to get away from the pressing social conventions and the imposed structures of meaning. A violent break – moving away – was necessary to create the possibility for an encounter with my own existential needs, creating a void which could only be filled by setting my own desirable goal, discovering and sorting out bricks to build the road towards it.

After a system collapses through a revolutionary effort – an encounter with the inevitable structures of meaning – the truly important work begins. It is not solved by rapidly filling the void, but by readjusting the goal and therefore re-committing to the road, tolerating and encountering yet another leap into unknown territories.

image: developed for a research presentation at the end of a Pataphysics workshop, Nele Brökelmann (08.12.2017)

2) structures of meaning – is a term I developed and explored in my Master Thesis (Den Haag, March 2018) P.S. I love you – Or how I learned to love power structures

3) taken from my Master Thesis and slightly rephrased

5) Rosa Hartmut on Resonance and Alienation, The Future of the New - Artistic Innovation in Times of Social Acceleration, p. 43 (Valiz, Amsterdam, 2018)