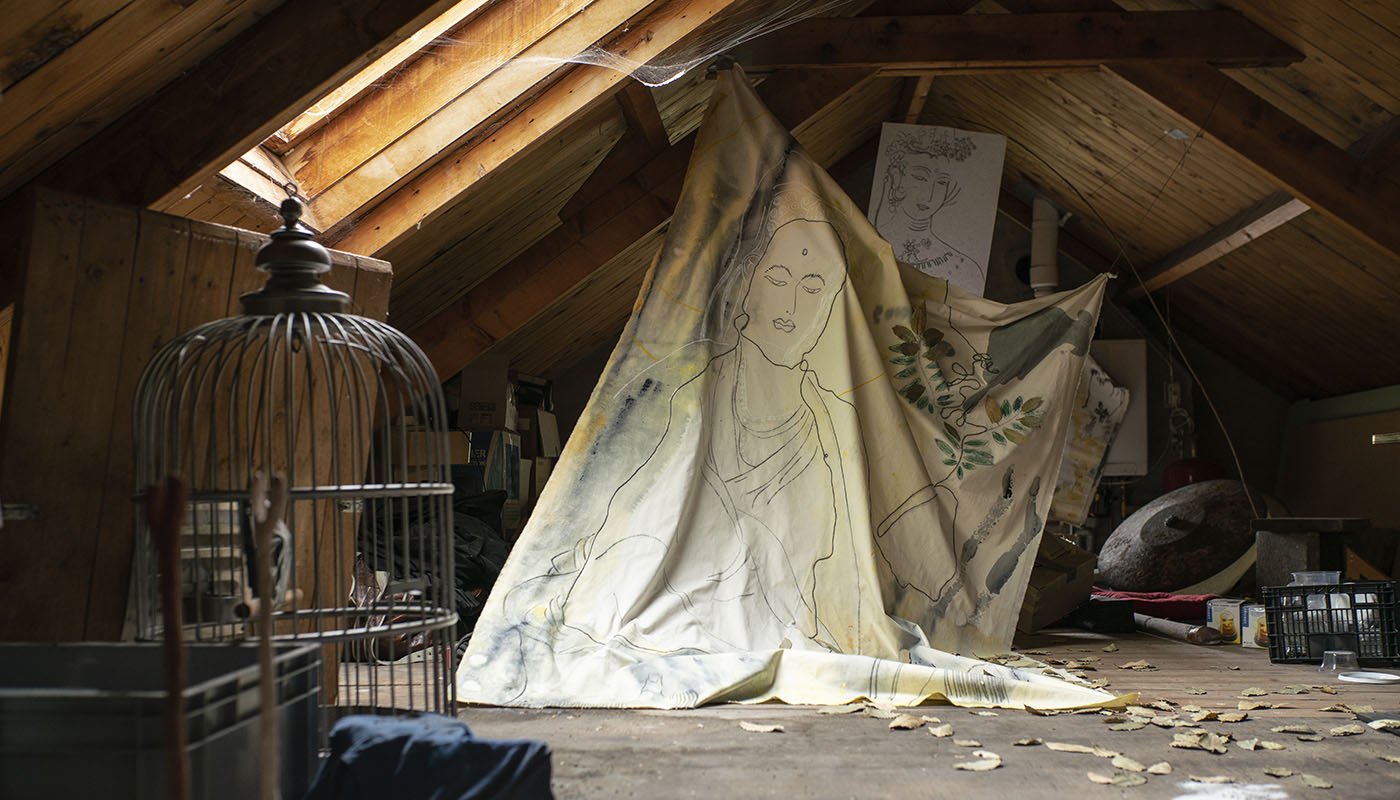 Appearances of a Cultural Jet Lag

Artist Hussel Zhu studied Visual Arts in Shanghai and graduated in 2021 in Fine Arts at AKV|St. Joost Den Bosch. His residency at Witte Rook started about two months ago. A few days before the end of his residency we [ed. Annosh Urbanke] met in Breda. At that moment, Hussel was considering which works he wanted to show, and how, for the open studio in the weekend of the 28th and 29th of May. We started our conversation and Hussel told me about how he began the residency.

Cultural jet lag
“I felt lucky to find this residency after my graduation. But at the same time a lot of things crossed my mind, and I felt a little all over the place. I hadn’t been back to Shanghai, where I grew up and lived before moving to The Netherlands and hadn’t seen family for a long time. I realized that the longer I live in another country, the more aware I become of culture. I often feel distant towards my own culture. Shanghai, and many other places in China are developing rapid as a result of the changing economy. I’m from a rural part in Shanghai, where we for example used a well for the water. This area was considered to be conservative even, without many job opportunities. I forced myself to move away and adapt to the city life in Shanghai. After living there, I decided to move to Europe to apply for a master’s programme. Somehow, I preferred The Netherlands and at the time I didn’t actually realize what it means to move to another country and to be in a total new social environment.”

Hussel explained how relocating to new environments, especially moving to Europe, made him experience a long-stretched jet lag that manifested beyond time difference. Politically, he felt that there is “maybe even more of a jetlag,” which he calls a “cultural jet lag.” Not only did he become aware of his new surroundings, but his relationship with and consciousness of his former Chinese environment perhaps changed even more. New or different values, like for example about gender and queerness, didn’t always match with some of his previous cultural understandings. This made him doubt his own cultural values, which he explains as the phenomenon of feeling like going through a cultural jet lag. 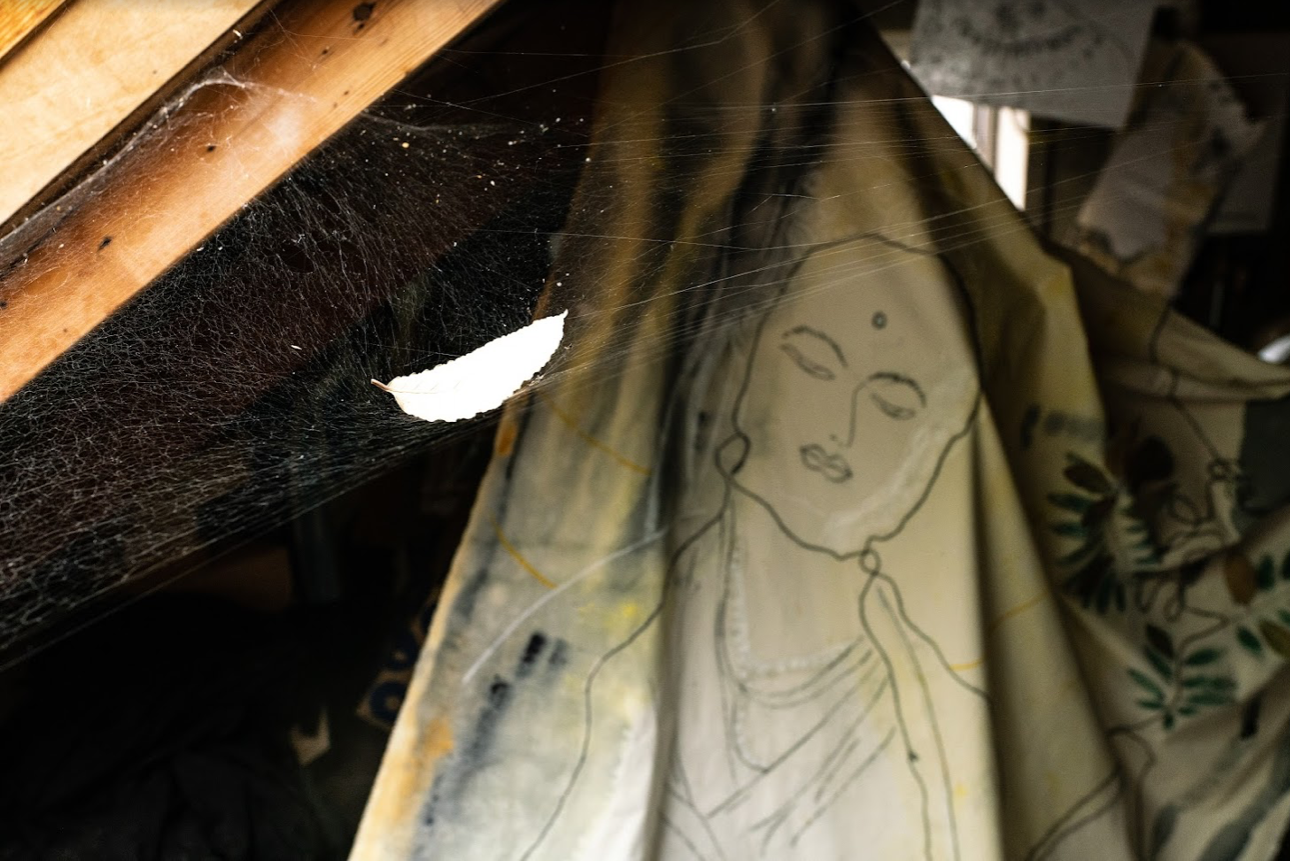 A glance around his work space in the residence shows that Hussel has portrayed a series of perceptions of Buddha, which he described as being the ‘Guanyin Buddha’: “This Buddha was firstly considered male, but its gender changed in history and is now considered female.” As I continued looking around, I noticed two versions. The first I saw was a rice paper hanging from a long wooden branch. Thin black lines depict a serene and gentle Buddha with many details and curling lines. The second version consists of a large piece of fabric with a drawing of Buddha, that seems less graceful than the other version. Contrasting the first version, this one has no details depicting hair or jewellery. Finally, Hussel pointed to an abstract drawing, which is actually a third portrait of Guanyin Buddha. This one is unidentifiable as Buddha – merely next to the other two drawings does this resemblance appear – as this third version consists solely of abstract threads on textile. 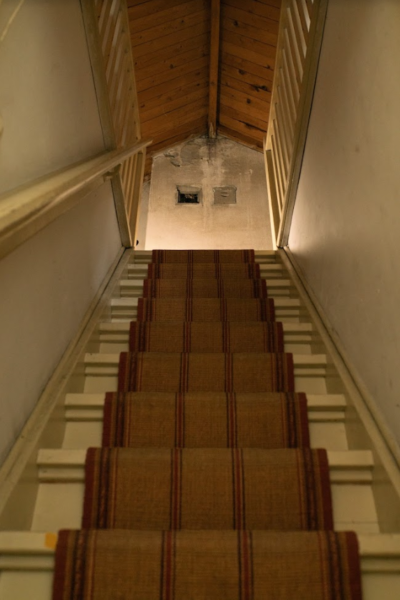 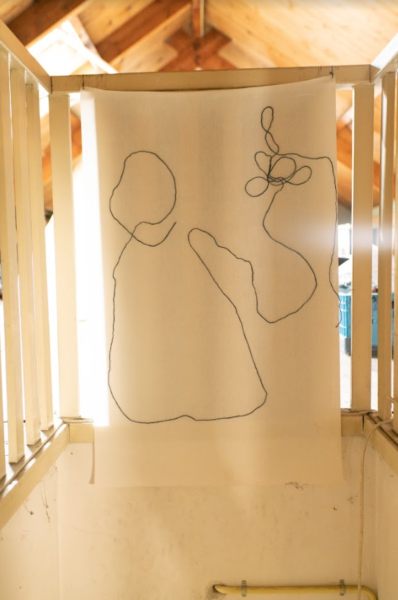 Hussel explained the process of the different versions and the abstraction that developed: “I want to paint traditionally and as precise as possible. I try to recall traditional painting from tv-series that I saw during my childhood. At the same time I feel a sort of dissonance with my own culture. I want to get closer to my culture by painting but I actually mimic my own culture, which sounds ridiculous. The changing shapes that Buddha takes in this series, are my understanding of my own culture. It becomes abstract because I sometimes feel like I know more about the European culture than the Chinese. It makes me doubt where I belong.”

Open studio
When I asked him about the presentation for the open studio weekend, Hussel tells me that there will also be a video work. The video will show a slideshow of images from his childhood home, combined with the song Baby One More Time by Britney Spears. Hussel used to listen to this song on his Walkman and emphasises that he sang it over and over. This song? “Yes, as a child I listened a lot to this song. I didn’t know how offensive the lyrics are. It’s just repeating, oh, baby, baby again. Oh, baby, baby again. Oh, baby, baby. You don’t really know what’s happening, but in the end you just mimic it. So, it’s like a parallel world in which I acted as if Britney Spears was part of my reality. Maybe it’s something connected to globalization in which I enjoy the funny fact that these lyrics in pop music teleport from a more advanced, more developed country to a young boy like me, in that rural area in Shanghai.”

We continued by looking at the photos for the slideshow. The photos show a stripped house, raw, without furniture or anything on the walls. It’s where he grew up and it’s not the exact setting of where you would expect someone listening to Britney Spears. I notice that there is a strong sentiment in the different parts of the presentation. The repetition, the new context in which it is shown, does not dwell on the past but says something about the present. The parental home was demolished and his family now lives in a modern house. And the drawings of Buddha? They will be shown in the attic of Witte Rook. We walked towards the attic, where Hussel showed how he plans to exhibit. In this setting, the objects radiate a sense of preservation. I asked him if this is the reason he wants to show them there. “I want to exhibit these works as if they were antiques in an abandoned warehouse, because I feel we are putting our own culture into storage. It does not necessarily imply that we are abandoning them, but we are just not making any real use of them.” 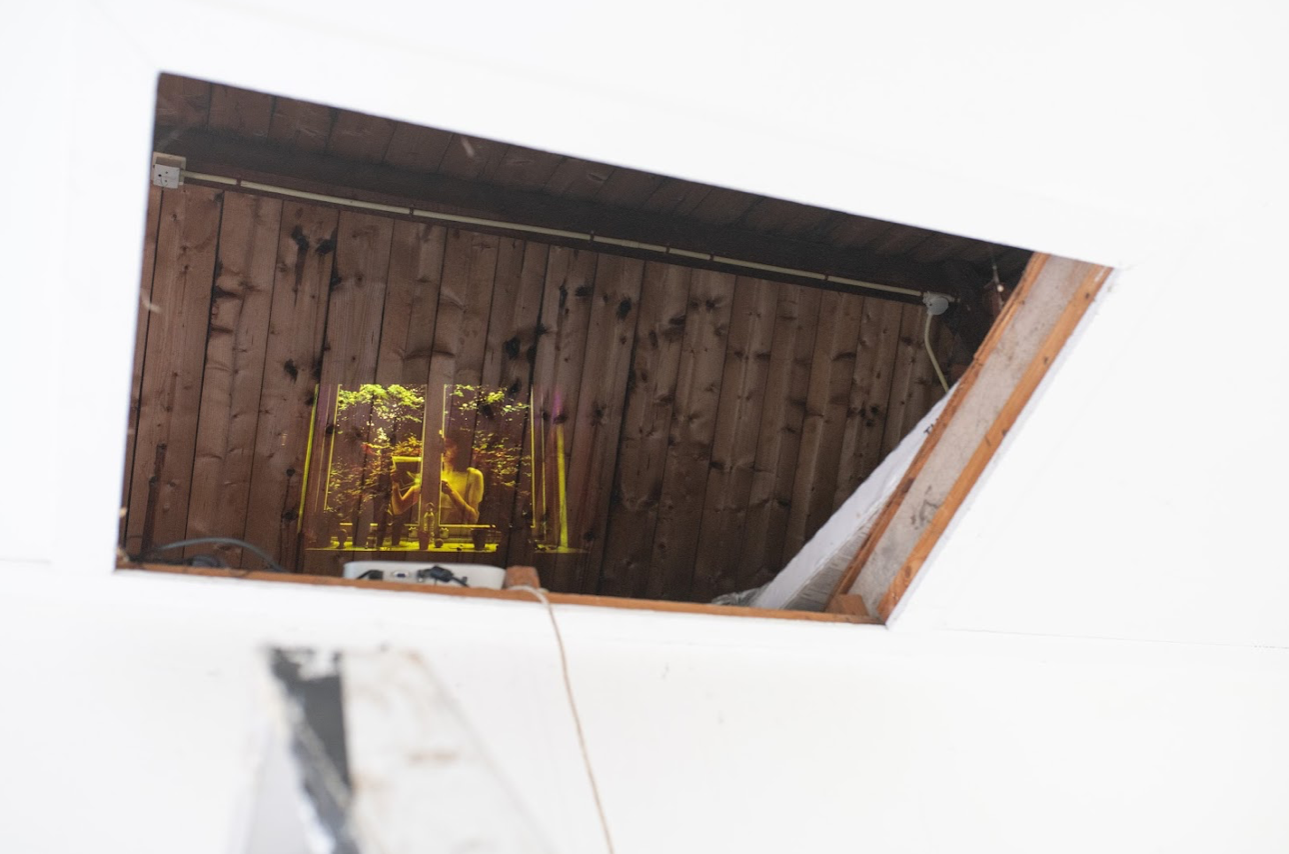 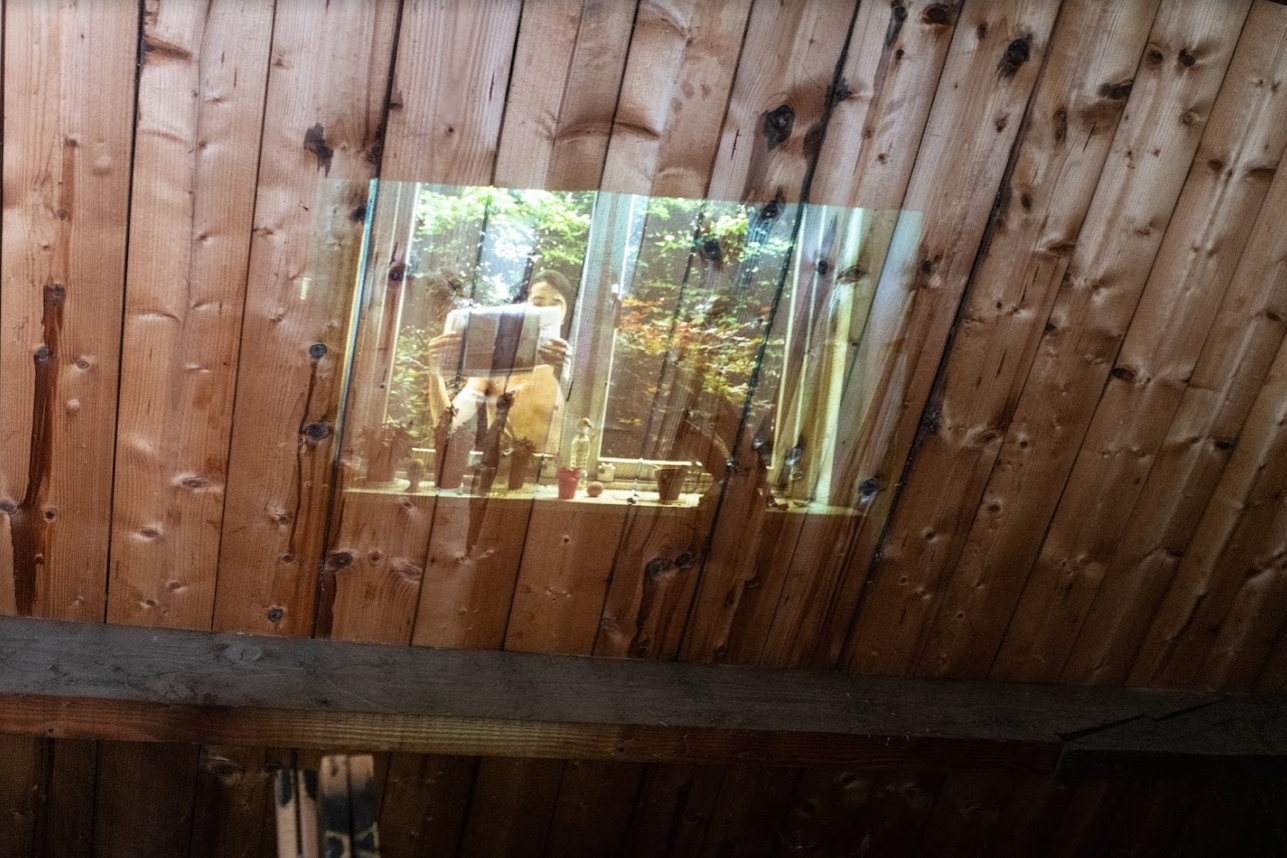 Language
As we continued, we also talked about the aspect of language in his work. It’s a central element, especially in the more recent works that he created in The Netherlands. We spoke about English as an ‘art language’: “I learned English maybe just several years ago, and now I’m able to speak it. I didn’t learn English in a relaxing atmosphere. I learned it during my job and it felt more like a responsibility since you have to talk in order to finish your task. I worked in an international residency program when I was in Shanghai. I met a lot of international artists. None of us spoke each other’s mother language. So, I often had a doubt: did we really communicate with each other?”

Lost in Translation is a work where Hussel collected ‘traces’, objects that artists left after their stay at the residency where Hussel used to work. Photos, notes, newspapers, fabrics, insect toys, wine, maple syrup, sculptures, even tissues – he kept them carefully. After resigning from this job, he contacted the artists and invited them to answer three questions in their mother language: What did you do?; What will you do?; and What are you doing now? He translated the answers, and when he received the translation, he noticed: “Somehow, the answers and the ‘translations’ matched up, but as an intimate translation.” ​​​​​​In response, I asked Hussel if he enjoys the part of not always understanding or controlling a new situation, being in a somewhat abstract perception of an environment that is relatively new to him. He replied: “I realized language is not necessary to communicate. It is not the most important thing, because we also use body language, we have care, we have love, which is very romantic. We have something else to communicate. Even a smile is a language. Language is just a tool, like transportation, somehow. I feel like my mother language is a kind of perspective. I have another system when speaking English. I feel like the whole logic is missing.”