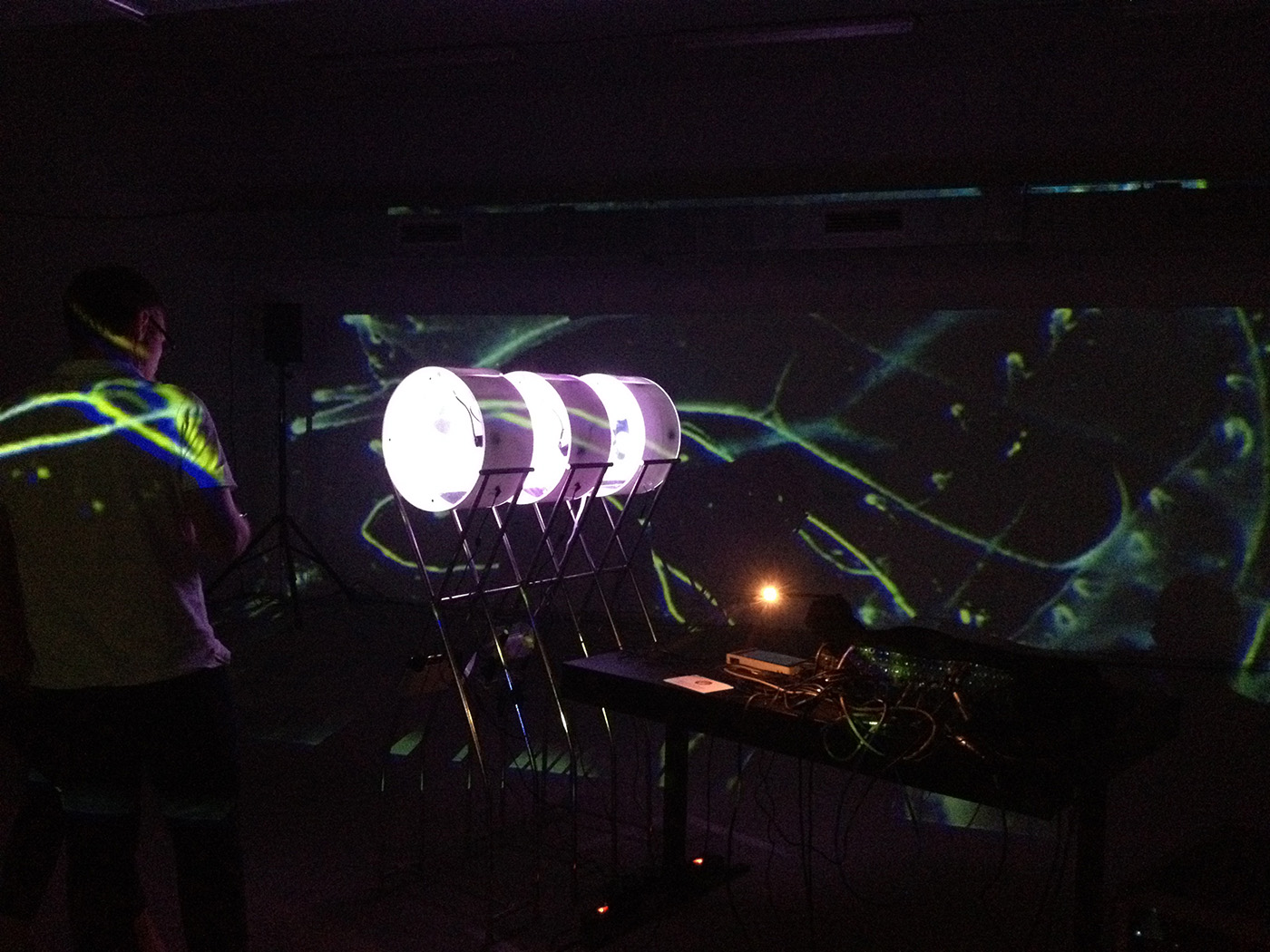 Merge of the senses

Can the Ars Electronica festival interconnect art, technology and society? Through lectures, discussions, concerts, performances, exhibitions and a DIY fair an overview of current developments within the three fields is given. The hosting venues of this annual festival are spread all around the city centre of Linz, Austria.

A lot of approaches are represented by, for example, showing off the newest techniques or asking how society approaches technology. How technology is part of our society and how this complex interconnecting field can be captured and questioned.

In the symposium The Alchemists of our Time Verena Kuni gave an insight in how alchemists are questioning current developments in society. Kuni, who has a visual culture background, raised the question about the gold of our time. Is it still something physical or is it really something non-physical, something the consumers cannot grasp the value of, like our data or bitcoins? What are we humans searching for in this time, how are we imagining the future?

Humans are inevitably curious about what may happen in the future and how future might look like.

It is funny that most of the artworks in the basement of the main venue, an old huge postal distribution centre, have a futuristic appearance. The seclusion combined with the darkness of the space, which triggers the feeling of being in a bunker, intensifies that impression.

Drawn by the movement and sound of this installation you enter the room. The sounds are mainly produced by a video where a dreamy female voice talks about the characteristics of the jellyfish and the human dream of immortality. Explaining that through studying the different species of jellyfish this dream might gain ground, since some species of jellyfish become really old and certain ones seem to live forever.

Apparently this installation is originally part of a stage performance with sounds and visuals, which explains the colours projected on the corner above the three round containers which are holding jellyfish. The containers are lined up, the jellyfish inside are spinning in a circular movement. 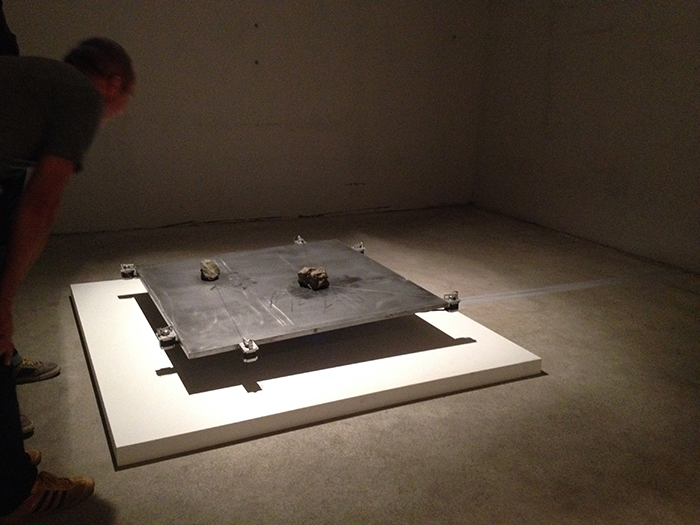 Sebastian Neitsch, a former resident of the European Space Agency and part of the collective Quadrature has filtered his findings from the residency into a kind of perpetuum mobile. Two stones attached to wires on a balanced plate of steel.

The two stones on top of the plate are supposed to create an equilibrium state through adjusting their positions. This appears to be an impossible task. The state of balance is short-lived and therefore the stones need to constantly recalibrate.

Chozumaki by Nelo Akamatsu from Japan

Chozumaki also plays with constant and ever-changing movement. It is one of the simplest artworks of the whole festival, in terms of technology used and shown. Three glass-flasks, water and magnets. This combination again creates a circular movement which produces the sound coming out of the spiral-horn opening at the top.

What is fascinating about this and the following work is its simplicity and the movement of the spectator it induces. This work is so diminutive that you are drawn to come closer to see the swirl moving and to hear the sound. It creates a peaceful concentration on what is in front of you and doesn’t stimulate all your senses without you taking action to make that happen. 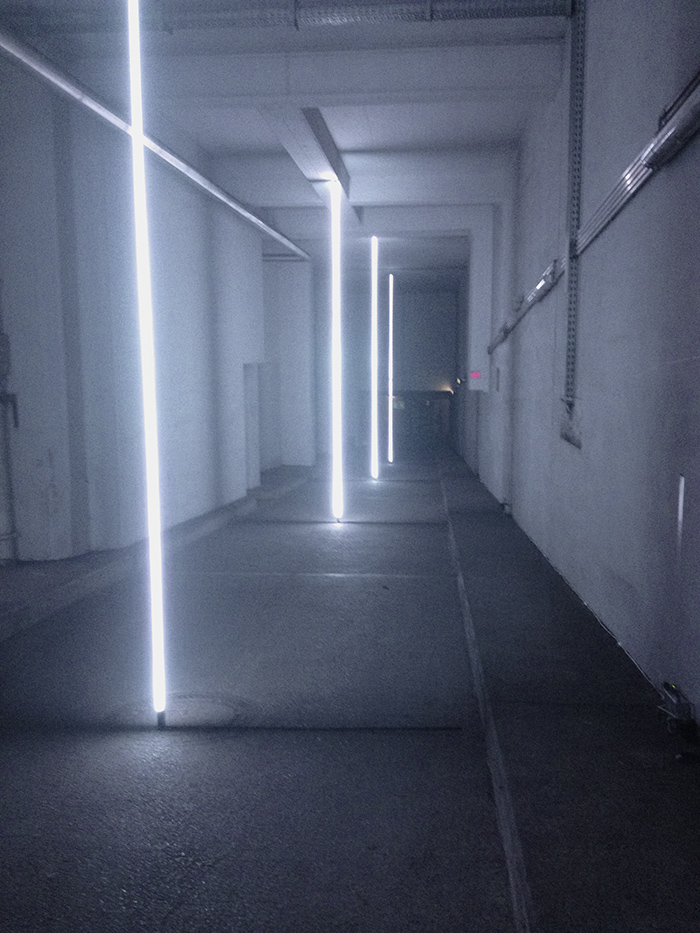 f2 ( ) by Tomonaga Tokuyama from Japan

This light installation is installed in an at least five meters high corridor. The spectator becomes an active part of the work while walking through the installation. The light-tubes have sensors and the movement of the spectator creates local sound.

The sound doesn’t differ in its characteristics from the sounds which are used in most of the artworks in the basement, but in this context it makes sense. It isn’t too present, it doesn’t feel artificially generated, but probably because it is generated through the actual movement fits the experience.

While walking through this corridor an association arises of an abstract experience of walking through a forest or church. The gaze keeps going up and forth in between the ceiling and the ground. While going back to the starting position walking backwards seems appropriate to the attempt of grasping what is so fascinating about these oversized light-tubes.

Throughout the whole festival there were some artworks that were fascinating and a lot which were annoying. An unwritten law in the basement seemed to be to use dark generated sounds with low basses and undefinable peeps and squeaks. Because of that most of the works blend together, which makes the simple ones stand out and radical in this context.

But what was triggered by visiting the basement is a notion of a challenged way of seeing and analysing artworks. It isn’t something you come across in every museum and therefore opens doors and creates interconnections.