Zoeken Contact Partners Auteurs
Home / Artikelen / Q: Can the Circle be unbroken? A:— A conversation with Helga Jakobson 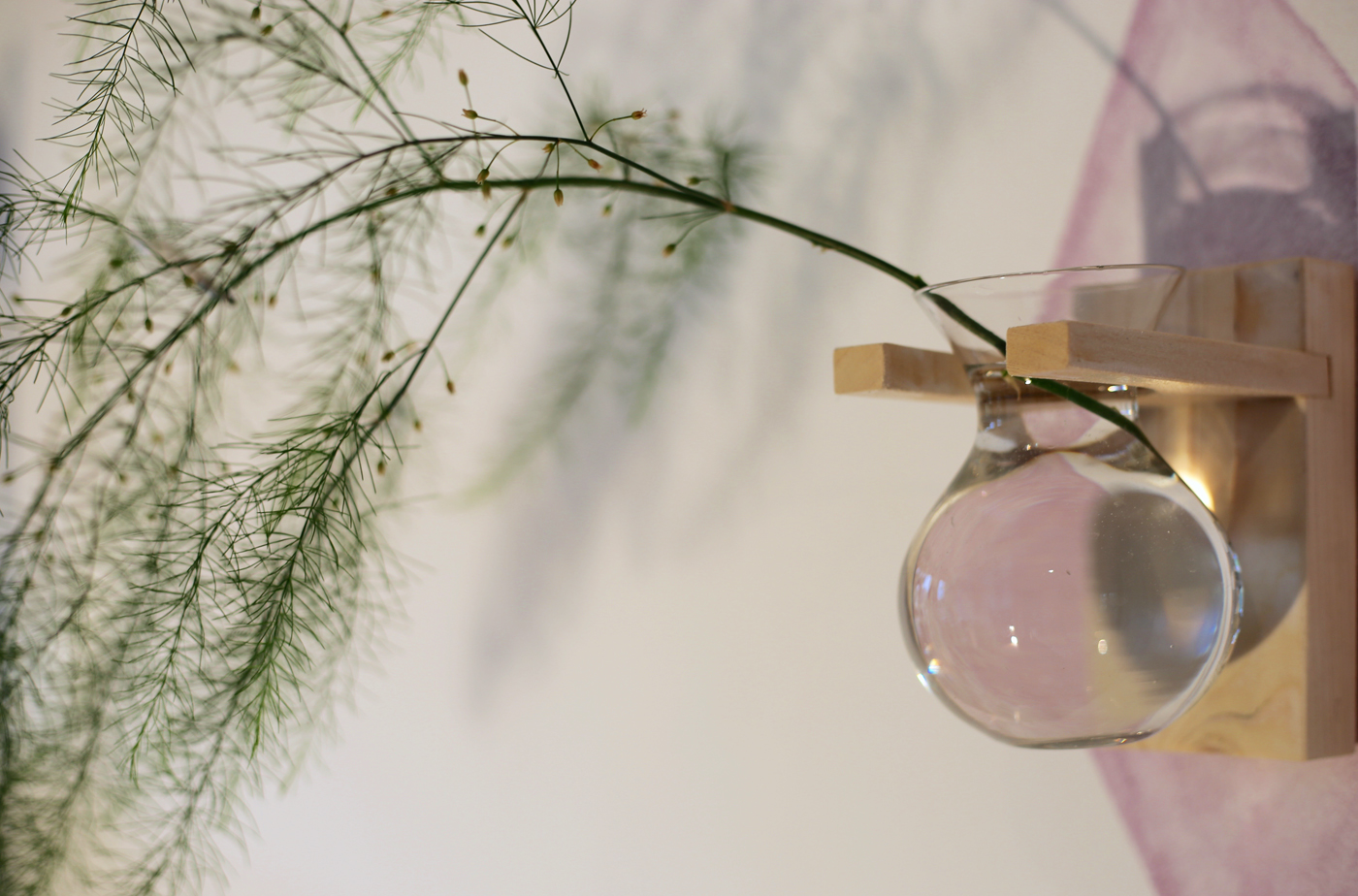 Q: Can the Circle be unbroken? A:— A conversation with Helga Jakobson

Helga Jakobson, hailing from Winnipeg, is the second artist in residence at Witte Rook and she has filled the small second floor studio of the art space with plants and electronics: rhizomes of plastic and copper connect flat, silicon tubers to a network of wiry weeds sprawling over tables and walls. The systems connect where their leaves touch: soft, green leaflets get grabbed by the small metal clamps of a digital Venus fly trap, which however does not feed on careless flies, but, like an electric vampire, leeches any voltage straight from the plants—who have no use for it anyway, though Helga certainly has. 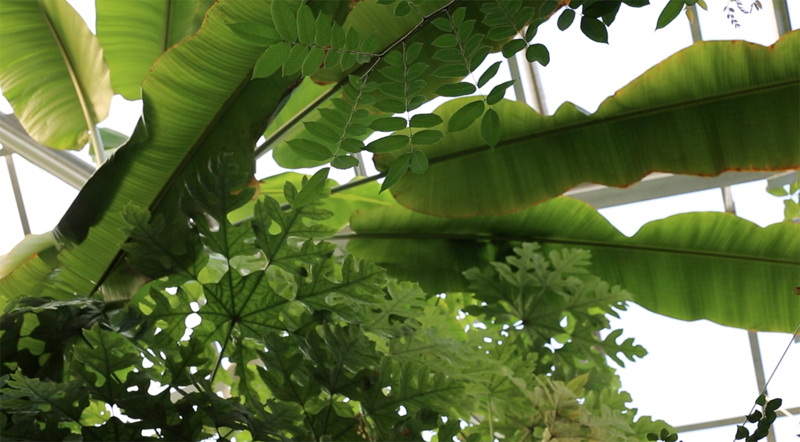 “The title of the show I’ll be having here in June is Phytophonica. It’s a made up word that I’ve just sort of coined. Phyto meaning plant based and phony, as in symphony, referring to sound. So its plant-based sound.

I’m picking up plants from around the neighbourhood and putting them in these little plant holders I’m making. There will be somewhere around ten of them, placed on the walls and connected with alligator clips to these micro controllers, each triggering a different note. I’m trying to showcase their energy; their life. Sometimes the signal will just stop, or starts going really sporadically, and this has to do with people, animals or other plants around them, or whether they’re watered or the sun’s really hot or they’re producing pollen. For me it’s about showcasing that there’s a life going on inside these other beings or within other organic material. But I’m not trying to impose an anthropomorphic view. It’s kind of like giving a non-human voice to non-humans.”

“What do you mean by non-human voice?”

“Well, music is a non-human voice. So instead of trying to generate a text from their electricity, or poetry, or a painting, I’m trying to give them an opportunity to speak without saying what they’re thinking. I think music is a space where there’s emotion and expression without needing some sort of didactics and so I’m really trying to just let them express themselves without giving a literal interpretation.”

“In your artist statement you say that this ambition to show the inner life of plants comes from an interest in death. How does that connect?”

“It’s very hard to bring all of this back to a single point—because there are a lot of points. I think it all comes back to dealing with the unknown, with loss, with death. I’m interested in a lot of different media and in very different topics, but all of them through this idea of entropy, or death, as a kind of counter-capital. So instead of this obsession with having, keeping, owning and legacy—which all have to do with control and power. I’m really much more interested in ephemerality and in things that slip away. I think it’s really important to discover autonomous ways of coping with these things.” 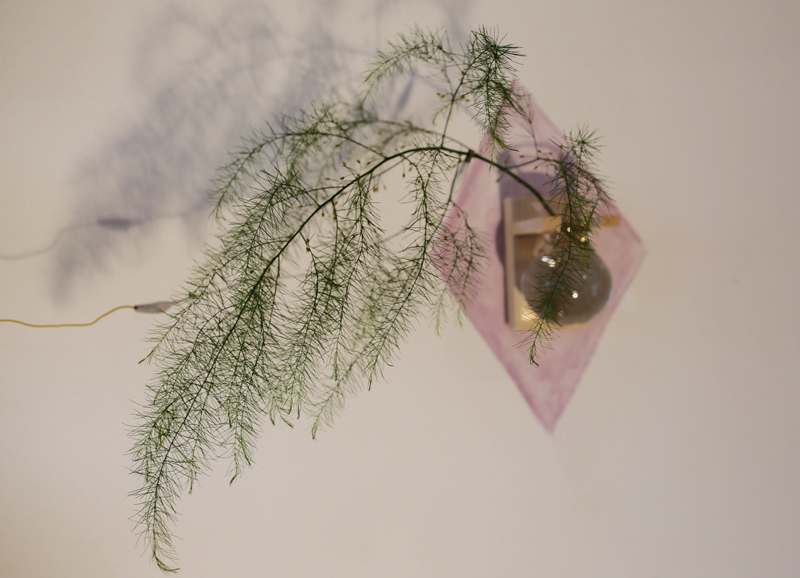 “What are autonomous ways of coping?”

There’s a theorist named Armen Avanessian, who speaks about post-contemporary angst and fear, which is  a term that seems to capture this climate of fearfulness where there’s no way of anchoring yourself to truth, because you’re being told so much, and there are all of these things in the media that might not be true and on the other side there’s this constant fear of things falling apart or the environment falling to shit. But what can we do? I think overall there’s a lack of ability to deal on our own; of autonomously coping. And so, for me, autonomously coping means building instruments to communicate with plants in a different way. But in a subtle, personal way. So I’m not trying to make some crazy, massive instrument, or some enormous alarm system. I’m just trying to find ways of dealing on my own and maybe showing people ways in which they can also cope on their own. 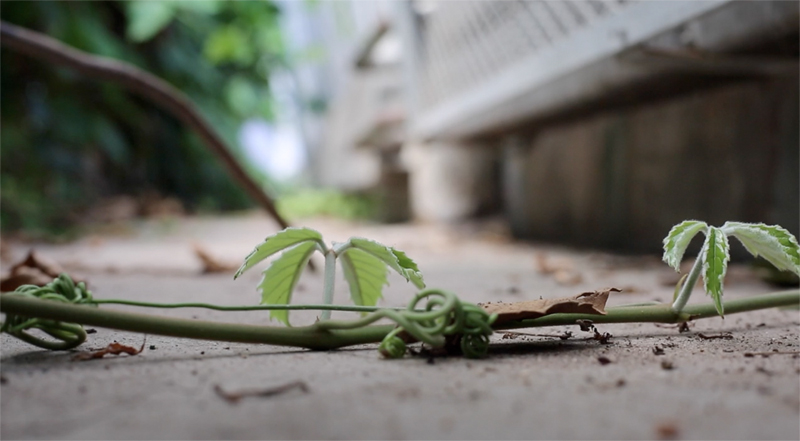 WHAT HANDLING HANDS HAVE

That’s why I try to do as much handling as possible. I try to do as much of my coding myself as I can, I’m also handcrafting these plant holders for instance. If I cannot craft it myself,  at least I’ll work one on one with an expert to gain a hands-on experience. I think this is a way of creating autonomy through personal investigation, and trying to come to terms with all the unexpected parts of the things and beings around us. And I guess I’m trying to make sense of it because I think it’s very important to start understanding and making action towards the loss of the environment and finding our own way of processing this, instead of only asking experts what to think. And not only because we all have to do work to ensure that this planet’s health keeps up, but also because we have to learn how to deal with the loss of it, if we’re going to combat this kind of cultural anxiety and fearfulness. So I’m trying to encourage others to find their own ways as well, and that might not be building instruments for plants, but there are lots of ways that you can learn how to become comfortable with death and comfortable with the unknown.

Another work that I’ve created in this vein was a piece where I led a project in my master’s programme in Paris, and my class and I examined oracle bones, which are the oldest existing records of the Chinese language. In this process, questions were written on turtle shells, which would but put in a fire by a shaman and when the shells would crack, the shamans would determine how these cracks would reveal and predict the future. Another influence for me is blues music. I think that’s another way too, but a bit more vague. In blues they also ask the questions: ‘Can the circle be unbroken?’, and maybe some people singing are actually looking for an answer, but maybe most people just want to talk about it to someone.  I think there are all these ways we deal with the unknown and it often comes through the cultural production: through art, through music, through poetry.”

“Why do you think the arts are particularly suited for this?”

“I think because there is… Hmm… That’s a very good question. There are lots of reasons why and I think one of them—one of many, is because in art there is an attempt from one person to express the feeling and not necessarily the fact. Because facts change constantly. It’s hard to state facts as facts and be able to touch people. Think about Galileo, who got excommunicated for defending facts. Whereas when you speak through a filter of poetry, or a filter of art, you don’t have to be a hundred percent certain—it doesn’t have to be something you’re married to. It can be something that’s just you reflecting back on the world and creating this kind of cultural archive, which in the end becomes really important. 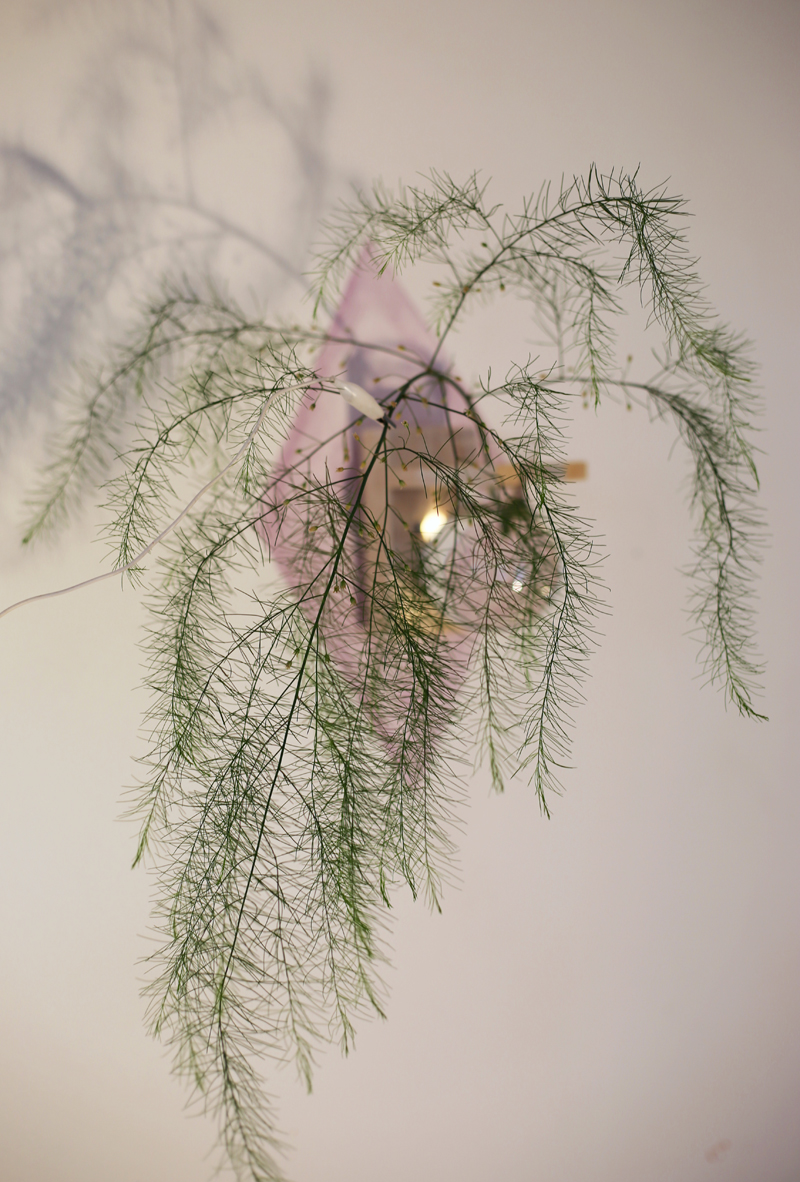 This kind of implies that the world in which we live is made up of the stories we tell in our time. This is showcased in these alt-right examples of fake news. What happens when authorities start telling stories that are very destructive? It is as true for someone to say climate change isn’t happening as it is for someone to say that it is; when it’s on news stations and it’s a battle between ‘experts’.

Donna Haraway has this quote: ‘It matters what stories tell stories.’.

(This quote comes from her book Staying with the Trouble, where it is used like a musical theme, in the sense that it is repeated, shortened, lengthened and varied in all kinds of ways time and time again throughout the text. The ‘announcement’ of this ‘theme’ happens on page 12, where she writes:
“It matters what matters we use to think other
matters with; it matters what stories we tell to tell other stories with;
it matters what knots knot knots, what thoughts think thoughts, what
descriptions describe descriptions, what ties tie ties. It matters what
stories make worlds, what worlds make stories.“)

I think it’s important for science to have this kind of outreach. For instance, in astrophysics, there’s this kind of painting that happens in astro-imagery. Where different colours express different gasses and this is how we’ve come to understand the universe. So there might be a purple cloud in the picture, but it’s highlighting—there aren’t literally purple clouds. So then why do that? And I think it’s because that’s the myth, that’s the story and that’s the way that we share. Through a kind of outreach and creating a sense of something as opposed to giving you a sheet of raw data and saying: well, but you should understand this. We can’t all be experts in every field, but through the lens of culture we can have a better sense of the world we’re worlding. 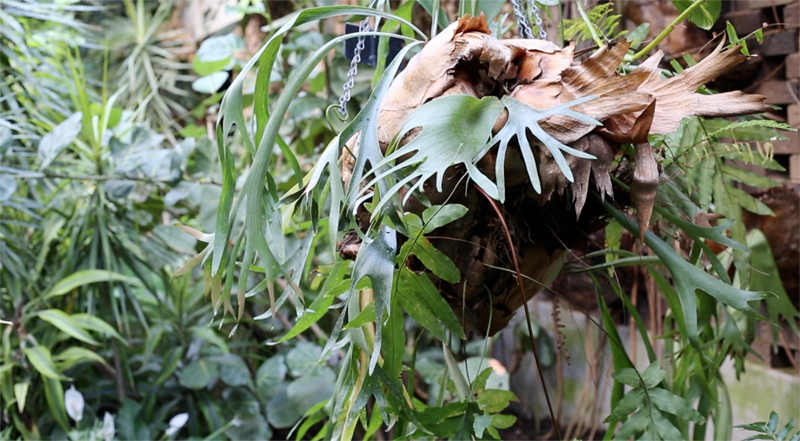 “And you in turn choose to do this outreach for plants?”

Yes, it’s all tied together somehow, though it’s a bit tricky. But I think that the reason I really like working with organic material is because it just is. And even if you built the most interesting equipment, you’re never going to know exactly what’s truly happening inside of a plant. It’s very obvious that we will never communicate with them in their exact language, but in the same way; I think we cannot communicate with each other, as humans and know exactly what’s happening in someone else’s skin, what their experience is. And I think that is, in a way, very similar to not knowing what’s going to happen when we die, or what’s going to happen in the future. So a lot of my practice is just addressing that, or pointing to it, while at the same time making my own peace—not coming to conclusions, but just making myself calm and accepting of the unknowns.

Liniestraat 111, Breda, Nederland
The exhibition AIR#2 - Phytophonica can be  visited from June 8th until June 10th 2018 and presents the results off the Artist in Residence at Witte Rook.