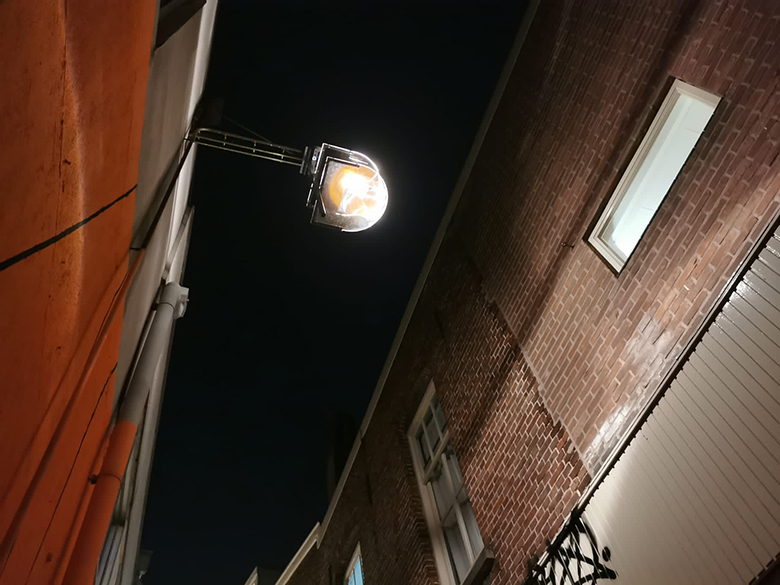 text me when you’re home

we are delighted that you are joining us tonight. We will start at 7:30 pm at Café Het Hijgend Hert, in Breda. There, we meet for a drink and welcome before we start walking from 8:30 on. The walk will last about 2 hours after which you are free to return back home or join us once again to round up the evening. We are keeping everyone’s way home in mind and are making sure that you can catch a train back should you live outside of Breda.

We are the night walkers. We are a group of twelve people standing in front of the café gathered around artist Alicia Kremser. The reason for being here and for being in this city is related to the installation ‘text me when’ which Alicia made as part of the project ‘Ontdek de Nacht’ (on view in October and November 2022) in the public space of Breda. Alicia introduces us to her motives behind this walk and speaks of the experience of vulnerable bodies being alone in the street at night. She brings into mind how the nocturnal also changes the perception in regard to women, not only in a physical sense but also how being vulnerable is a psychological issue symbolised in the phrase that inspired this walk: ‘text me when you’re home’. 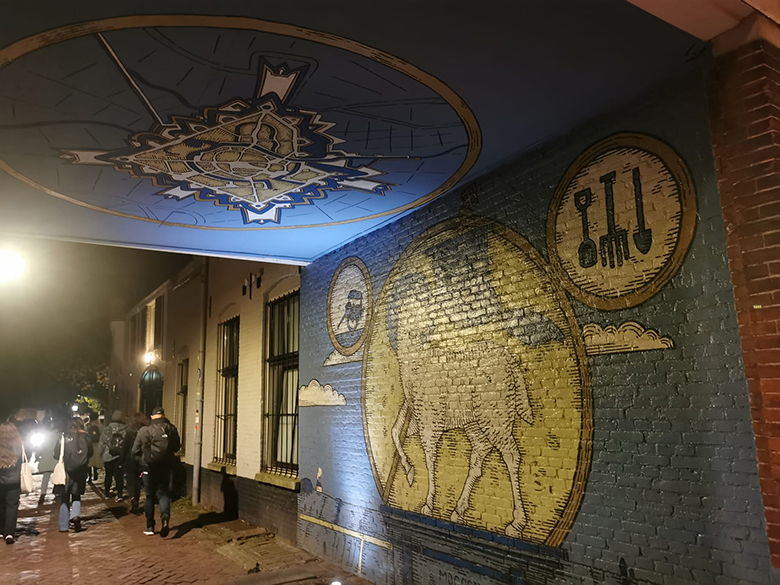 text me when
the nocturnal hours
bestow upon the city’s grid
a veil of ambiguity.

We start our walk by entering the small and hidden courtyard – just behind our meeting point – in complete silence. During our nocturnal walk we only communicate through our mobile phones, receiving text messages, as explained to us by Nikos Doulos who collaborates with Alicia in this performative walk. He states that we can leave the sound of our device on, because that is part of the sounds of the night, but no talking. Passing the backsides of gardens and through parking lots of the inhabitants – as an observing group of diverse bodies – we are immediately identified as intruders. Our solemn silence confuses people that call this part of the city their home. They take pictures of us, point at us or just stare… 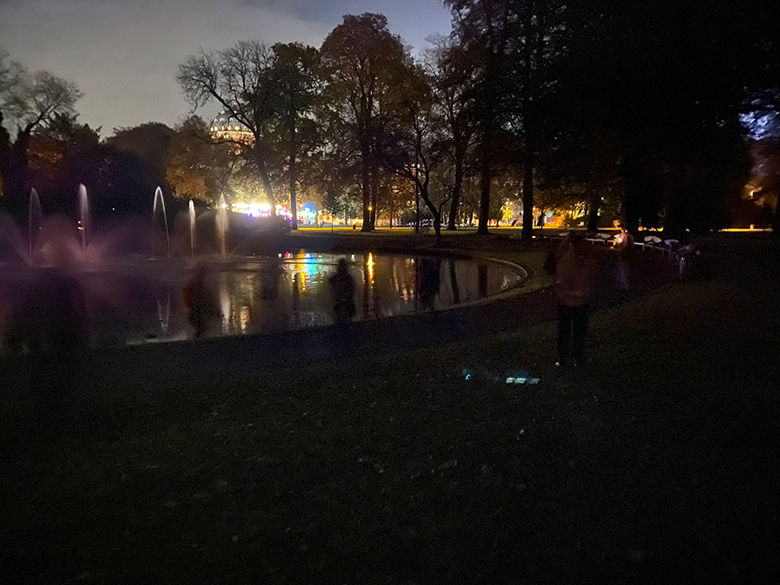 i seek to exist
in reverse analogy to spaces of
uncertainty
and fear,
in quest for moments of
alignment
with the city
and its nocturnal cosmos

Alicia guides us from modern buildings to historical streets to the most challenging part of the city for vulnerable bodies. The park is as usual full of people but in the evening the purpose for being here has changed. The families, joggers and the walkers that wander around for recreational reasons are replaced by bodies that just pass by to mix and mingle in the nightlife of the city, from station to station. Also, the tramps, the homeless, the dealers and the confused persons to be found here during the day have shifted their bodies to other places to stay for the night. The benches they occupy during office hours are now the seats for the lonely people. These bodies could be part of nightlife bodies but for some reason they just stare into the shadows, smoke a cigarette, and listen to music on their iPhone. We appear to be of no interest to them.

We leave the path and enter the dark parts of the park when our feet hit the grass. The trees sheltering us from the lights above. In this heart of darkness lays a labyrinth with the white statue of Vieze Jan in the middle, once called Hercules but his lack of clothes was not appreciated, hence the name Dirty Jan. But our stay here is not without reason. We are assigned to leave our group structure and actually be on our own for at least ten minutes. Wandering and keeping eye contact with each other as instructed is not an easy task to perform in the dark of the night. We can hardly see each other’s eyes, so we console in blurry faces. It is an uneasy wandering because the moment we stopped following Alicia, we are no longer able to look around us and instead we have to look at each other. All of a sudden, we are responsible for our own movements. A bewildering and uneasy situation that ended on the red bridge where we, still silent, only have our phones to text each other to check that we made it. ‘I am here, yes, me too’, and more spontaneous reactions to reassure ourselves that nobody is forgotten. Meanwhile we try to stare at each other’s faces while we listen to the sounds of incoming messages. 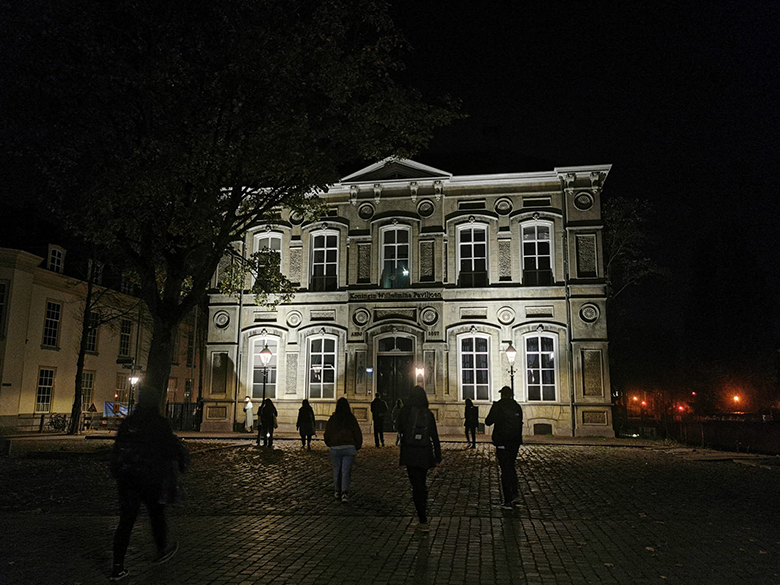 i long to engage
in a reciprocal act
of being cared for
and carried through
the night
Things have changed. Some of our group choose to follow their own path and head to the same destination while leaving the dark park and before we arrive in the bright lights. With the castle on our right, we are led to the market square where the city lives and breathes during the night with drinks, cafés, and a lot of merry bodies. 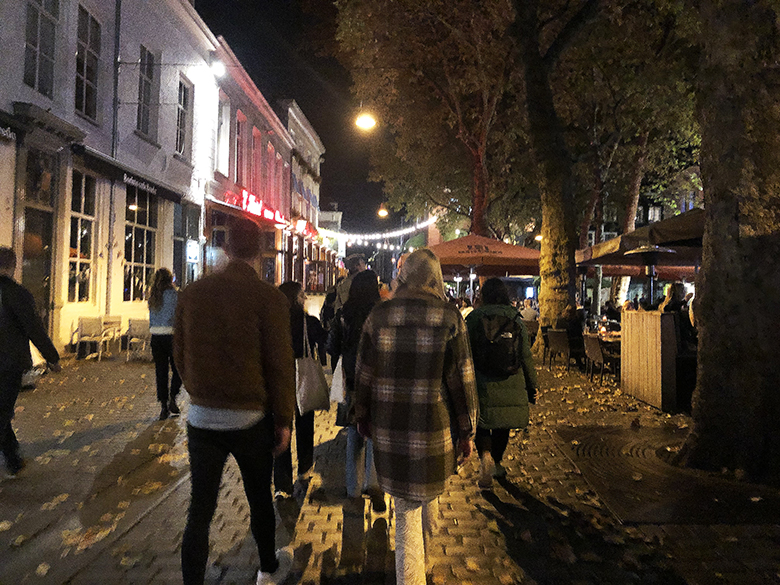 Crossing the market square, we try out some different formations of wandering. Sometimes people just blend in with the group without being aware of it and follow our footsteps for a while until they silently decide to leave us. They probably never knew that they were for some moments part of our attention and care, but maybe they felt it somehow. The silence we carry even extends to the terrace we pass by; silent people in couples sitting there together just looking around but not at each other.
Leaving the market, we encounter a new group to be recognized by their glow sticks and sounds of joy and laughter. They have other means to hide their vulnerability as women and put it in their own feminine perspective. 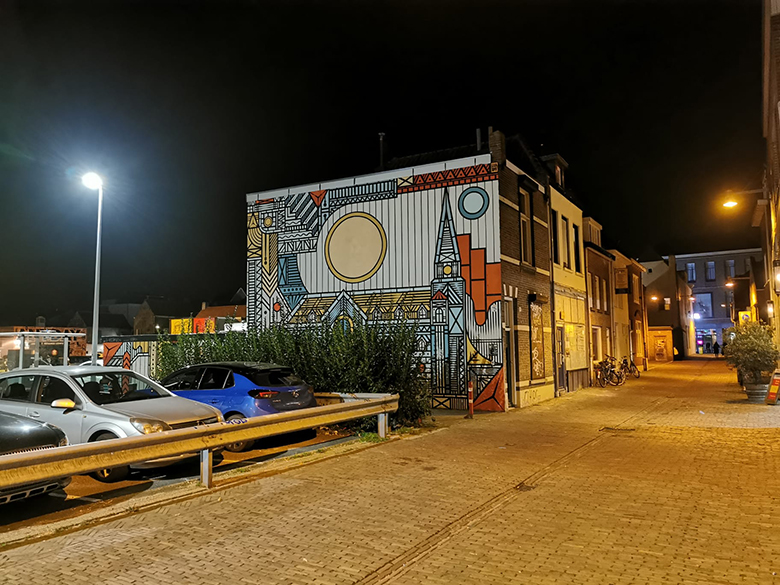 my fear of the nocturnal city
takes on a geographic logic.
parking lots, alleyways, bus
stops,
darkened sidewalks,
they all populate my personal
mental maps of safety and fear.

Unlike the other groups that squad the city we must be recognized through silence and distinguish ourselves with the complex task of not adding something but leaving something out. But that distinction is getting more and more difficult when we enter the parking lot. Automatically we spread ourselves between the open fences that mark the area where cars are dominant. We are almost invisible to people that we meet here. They have their own silence only to be broken by instructions which are necessary for going home or to express the hopes they have to for enjoying a night out.

The only thing we can be certain of is Alicia; she and Nikos text us their thoughts when we need it. In separate couples, triplets or just alone we follow her to the most uninviting parts where construction work and containers compete with murals and fences. There are lights everywhere which seems to mock the ugly and filthy situation, but at least it is not scary. Or is it our bond as a group which allows us to interpret the obvious otherwise? 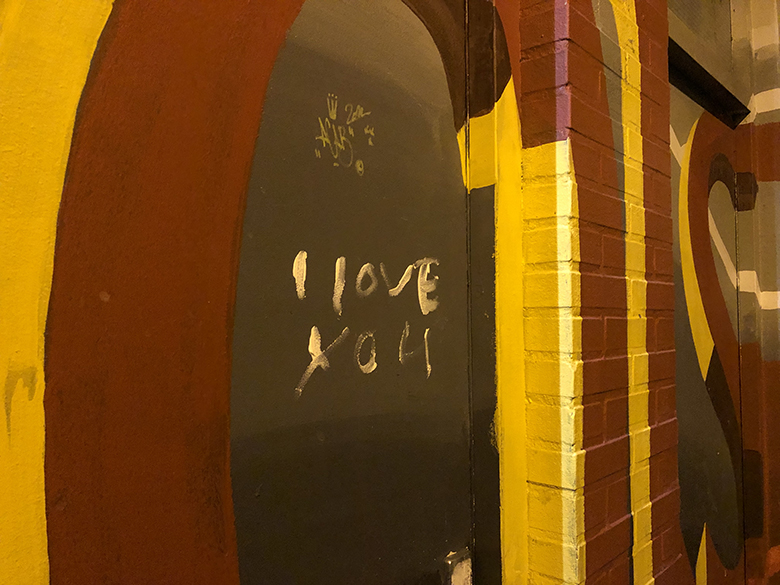 i long to exceed the constraints
that render my place in the night
restrictive.

We enter a small street where the cars have to respect the pedestrians and pass some more murals. One of them is even used for expressing the most important thing in the world: Love. But this mild act of graffiti was most likely meant for personal reasons. Funny how a mural comes in dialogue with graffiti tags layered on top of it. The contrast between the diverse types of mural painting is evident; half of the street is claimed by engaging murals with illustrative elements. Opposite are the blind walls that have not been painted so their purpose seems to collect all the undirected spray-paint. You can depoliticize the opportunities for expressing personal opinions, but not the urge to use public space for visual discussions – mostly performed in the night. 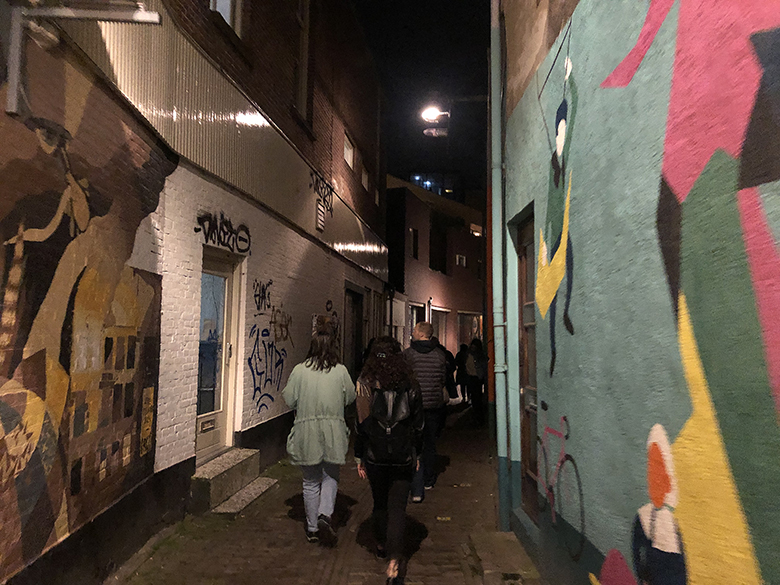 from here
new lines are drawn
venturing outwards
in a rhizome of connected dots
between human and non-human
bodies,
man made things,
wild and tamed vegetation,
between the ground
and the nocturnal sky.

There is still no end to our wandering as we are brought to a next level. To be precise the 9th floor of the parking garage where – after many steps – we found ourselves at the rooftop. Total silence, no passers-by, no car owners, just us and only us. At last, we are alone with our silent selves.

But not for long as Alicia takes us to the edge of the rooftop and to the excellent view on the normally busiest street of Breda: the central shopping area. But all is closed, it is night after all. From this point onwards, we cease to exist as mere nocturnal wanderers since our group is divided into ‘antennas’, which means to observe the surroundings into detail and share this in a loud and clear voice with the ‘receivers’ that jot the information down.

‘Only flashing – the H is red – another broken bike – do we wave back? – a smell of uncertainty – a man walks zigzag – sneaky peaky manicure – ventilation as a lolly pop – I heard screams, maybe children – I smell tranquillity – are they drunk? – are they enjoying the moment – the wrong hour of the clock – lonely flag waving in the wind – girls in leather coats – a French kiss, oh wow – pindakaaswinkel – no birds – doveshit – oil – airplane – empty rooftops – I smell concrete – I wonder what we are doing…’ 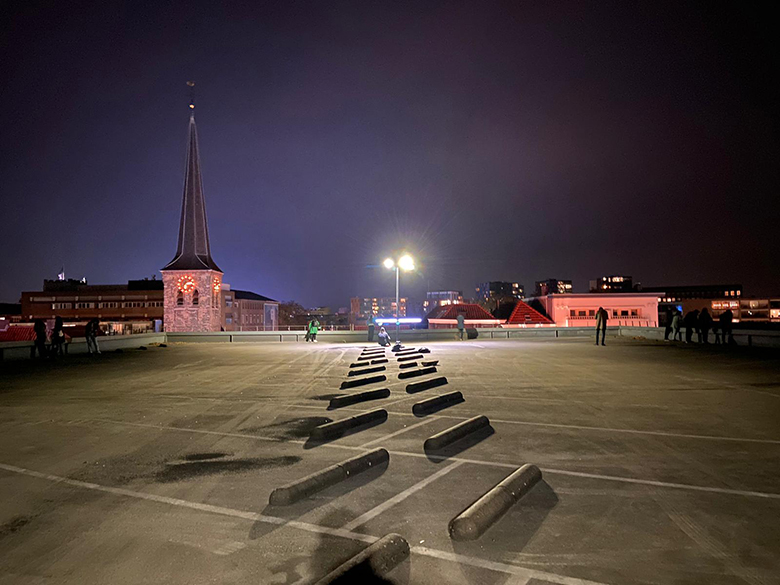 from here
we are tuning in
to those invisible threads
that make the night night.

We leave the rooftop in whispered silence; the spell seems to be broken a little, but we are still determined to hang on to it as long as we can. But anyway, our journey has come to an end as we approach a streetlight in a small alley. The lantern is part of Alicia’s installation and by using lenses, the lamp projects the sentence: ‘text me when you’re home’. A reminder of the reason we are here tonight, a reminder to all the passers-by that safety is a concept of sharing. Alicia concludes our collective wandering by expressing the emotions that struck her by experiencing the night in a city together. She reflects on the days of her youth when there was no sense of danger whatsoever. But while getting older, experiences and opinions that give shape to the idea that there is a difference in being safe and feeling safe, are to be taken into consideration. You never walk alone anymore; you always carry the ideas of others for your wellbeing with you. To get more grip on the situation Alicia shares with us her tips for safety and we all promise to text each other when we are home. 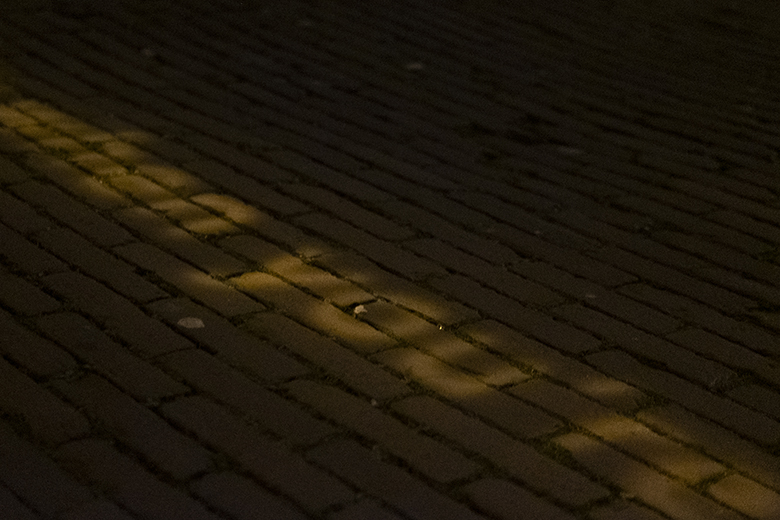 ‘text me when’ Is the latest work of Alicia Kremser that was on view in selected locations in the city centre of Breda during the months of October and November 2022. It consists of temporarily installed devices on a series of streetlamps, where the sentence ‘text me when you’re home’ is projected onto the street floor.

Alicia Kremser was one of the participating artists in ‘Ontdek de nacht’ (Discover the night) who has been invited by KOP and Stedelijk Museum Breda in an effort to engage with the works of Pieter Laurens Mol.*

In the framework of and as an extension to ‘text me when’, a participatory night walk took place on Saturday, October 29 in close proximity to the installed work. The walk was composed in close collaboration with artist Nikos Doulos.

* The exhibition ‘Nachtvlucht’ of Pieter Laurens Mol was on view in Stedelijk Museum Breda from July 22 till November 13 2022.

All pictures are taken by the participants of the Night Walk.
Meer items door Esther van Rosmalen:
opinie:
Anish Kapoor 'Paint it black'