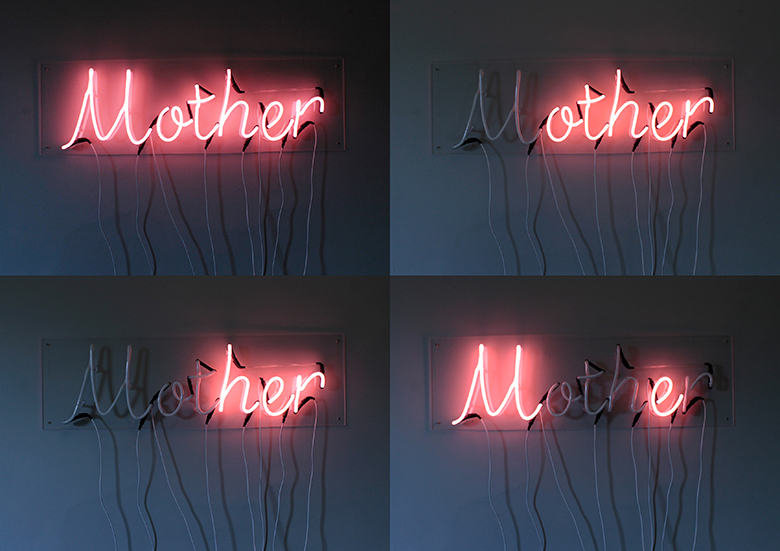 The lack of maternal representation within arts and culture has been at the forefront of my artistic research for over ten years. As a young single mother attempting to carve out a career as an artist, I struggled to find any role models and had to navigate a range of social and logistical barriers in developing my career. Frustrated with the lack of access for mothers in the arts, I set up Spilt Milk gallery CIC; a social enterprise whose mission is to promote the work of artists who identify as mothers, and to empower mothers in the community through artist-led activities. The exclusion of mothers and mothering within the arts is rooted in patriarchal ideals which have presented women with a set of narrow expectations that they will abandon their creative work for a caregiving role. The old ‘pram in the hallway’ stereotype does not allow for both mothering and a creative practice to coexist. Where men are celebrated for their roles as fathers, wom*n (whether they have children or not) are often labelled as “risky” resulting in a career drop-off point for many in their 30’s. Whilst this discrimination is not limited to the art world, the isolation of the mother “has a whole range of consequences beyond just the impact on the demographics of the sector… it means that crucial narratives and experiences are excluded from cultural representations” (Brook, O., O’Brien, D., & Taylor, M. 2020). Over the past few decades, mothers in the arts have instigated hives of activist activity around the world in order to debunk these patriarchal narratives. More recently, with the rise of accessible digital networks, artists have birthed what can only be described as a ‘mother-artist movement.’

When I first founded Spilt Milk, my goals were twofold; to promote equality in the arts by supporting and promoting the work of artists who are mothers, but also to centre the maternal experience as a valid cultural subject, thus empowering all mothers to recognise their value to society. Spilt Milk aims to be a space where motherhood is not seen as an obstacle to overcome but as a rich and empowering part of a multifaceted identity. Yet in my attempt to create this inclusive space within the arts, I’ve also encountered a multitude of barriers as a founder. What has transpired during the four years in which I’ve been running Spilt Milk, is just how ingrained these patriarchal structures are, and how necessary it is to invent radical alternatives which centre the experiences of mothers. We don’t need to dismantle the patriarchy, rather, create space for the matriarchy. Just as Andrea O’Reilly’s Matricentric Feminism (2017) declares that mothers need a feminism of their own, we also need an art model of our own that centres on matriarchal values.

I’ve always very much affiliated my role as Spilt Milk founder with that of mothering. Just as I raise my son in the knowledge that one day he will leave home to make his own path in the world, I aim for each of the artists I work with to be nurtured to the point where perhaps they no longer need the support of Spilt Milk. I strive to make things easier and better for the artists I work with, I take everything too personally, I celebrate their successes, empathise with their pain and constantly wonder whether I’m doing enough to support them. Founding a social enterprise is also akin to mothering; you conceive an idea, birth it into the world, often let it overtake your own needs and raise it until it can eventually function without you. Mothering is ingrained in everything I do.

While my role as founder of Spilt Milk often requires me to act as a leader, manager, director, or entrepreneur, I’ve never once considered myself these things. The reason being that these roles have been defined by patriarchal ideals centred around hierarchy. Traditional hierarchies promote a linear climb from one rung to the next, a growing divide distancing those at the top of the ladder from those who hold down the feet. Patriarchal systems are built upon competition and linear growth and our art world structures reflect this: artists must be ‘emerging’ in their 20’s and ‘established’ by the age of 40. In my experience, mothers rarely follow this linear path but weave in and out of a creative existence, many to emerge or re-emerge later in life with a wealth of experience to offer. While my role often requires me to lead, direct, or manage, I view myself first and foremost as an artist, a creative instigator, and an activist whose role is to nurture the creative participation of others. A matriarchal structure centres on a culture of care, collaboration, mutual respect and empathy. As Heide Goettner-Abendroth (2012) says; “in matriarchies, mothers are at the centre of culture without ruling over other members of society. It’s not to have power over others but to follow maternal values, i.e. to nurture the natural, social and cultural life based on mutual respect.” In this sense, matriarchal structures are circular in nature with each member of the group treated with equal respect and value.

So how does a matriarchal organisation actually function? What does leading from a position of care, fairness, and empathy look like? Here are some real life examples of how Spilt Milk has responded to patriarchal art world challenges:

Spilt Milk operates as an international, online membership network whereby any self-identifying artist and mother can join our community and become one of our artists with no pre-selection process. Our community welcomes women, non-binary people and trans women for whom mothering work forms, or has formed a large part of their lives. The route to, and experience of motherhood is diverse, and mothering is not synonymous with gender nor biology; our culture must reflect this in order to achieve real equality.

Removing the power of the curator (aka the cultural gatekeeper):

We offer the possibility that anyone can be a curator by becoming part of our exhibitions committee. For each exhibition, a new committee (made up of Spilt Milk members) selects artworks through an anonymous voting process. No links to websites, C.V.’s or social media handles are provided thus encouraging the committee to focus only on the artwork and not the professional status or background of the artist. This has resulted in diverse exhibitions which equally value the work of all exhibitors regardless of age, career stage, qualifications, prior success or connections.

We gave out unrestricted cash grants to four of our artist members in a ‘lottery-style’ award process. There was no application form and no restrictions on how the winners would spend the cash award. Four names were generated at random and awarded £250. Budget permitting, we aim to make this a regular award, because one of the best ways of supporting artist mothers in a capitalist society is to hand out cold hard cash with no strings attached.

Leading from a position of approachability:

The unapproachable ‘top rung of the ladder’ ethos not only fosters a culture of mistrust but means that management decisions are made by people who have no working knowledge or understanding of the issues they are aiming to resolve.  While fostering approachability is much easier as a small organisation, I aspire to retain this ethos no matter how big Spilt Milk grows. Leading from this position allows not only for trusting relationships to develop, but also allows for key decisions to be made collectively in response to the needs of all those involved in the organisation.

Sharing the secrets to success:

A patriarchal culture has driven an agenda where our peers are our competitors rather than potential collaborators and has fostered a culture of secrecy around sharing tips for success. In collaboration with members of Spilt Milk, I have begun an evolving resource library of successful applications in order for us to learn from each other and contribute toward continued collective successes. The matriarchy always leads from a position of collaboration over competition.

Providing childcare is one of the biggest ways that organisations could support those caring for young children, yet it is also one of the most difficult for a small organisation to deliver. The lack of affordable and accessible childcare is an issue ingrained in our patriarchal economic and political systems and there is no ‘one size fits all’ solution. However, it is a challenge at the forefront of our research and development and we do what’s in our power to make our programming as accessible and family-friendly as possible.

As a new organisation, there have been plenty of mistakes made but it’s only through testing these new ideas, taking risks and sometimes failing, that we discover how to do better. Through making room for matriarchal structures in the arts, we create room for mothers and mothering to become not only visible, but respected as an equal voice in our culture. By embedding an ethos of care into our organisations, we are not only supporting individual artist mothers, but leading by example and in turn nurturing their children, families, and communities. Audre Lorde (1983) wrote that women’s desire to nurture one another is where their real power is discovered, and “it is this real connection which is so feared by a patriarchal world.” Whether you call it; ‘the sisterhood’, ‘the matriarchy’, or ‘the village’, it comes down to the power of community to support and advocate for one another. A matriarchal revolution can change culture for the better, we should all be leading from a position of mothering.

Edinburgh, UK
Vrouwenmantel Art Research group invited Lauren McLaughlin to share their stories about her artistic practise and the role of care and motherhood.

Lorde, A. 1983. The master’s tools will never dismantle the master’s house. Crossing Press.

Lauren McLaughlin is a multidisciplinary artist, curator and activist based in Edinburgh. Lauren’s practice aims to draw attention to undervalued labour, inequality and injustice with a particular emphasis on representing the experiences of wom*n and mothers. Lauren is also the founder and director of Spilt Milk Gallery CIC; a social enterprise whose mission is to promote the work of artists who are mothers, and empower mothers in the local community through artist-led activities.

Lauren graduated with BA (Hons) Fine Art from Central Saint Martins London (2012), and MA Applied Arts and Social Practice, Queen Margaret University Edinburgh (2021). Her work has been exhibited extensively throughout the UK and Europe and is included in permanent public collections. Lauren’s work was the recipient of the 2018 Birth Rites Collection Award and her ongoing practice-research project; ‘Making Something From Nothing’, was shortlisted for the John Byrne Award in August 2021. Lauren’s work with Spilt Milk is being supported with funding from the Scottish Government’s Social Entrepreneurs Award, delivered by First Port.

Publicatie
“Born from the experience of being a mother, a parent, a caregiver working in the art and culture, this publication invites you ...
Door: GastauteurVrouwenmantel Art Research Group
praktijk:
'Ik' staat voor 'wij'