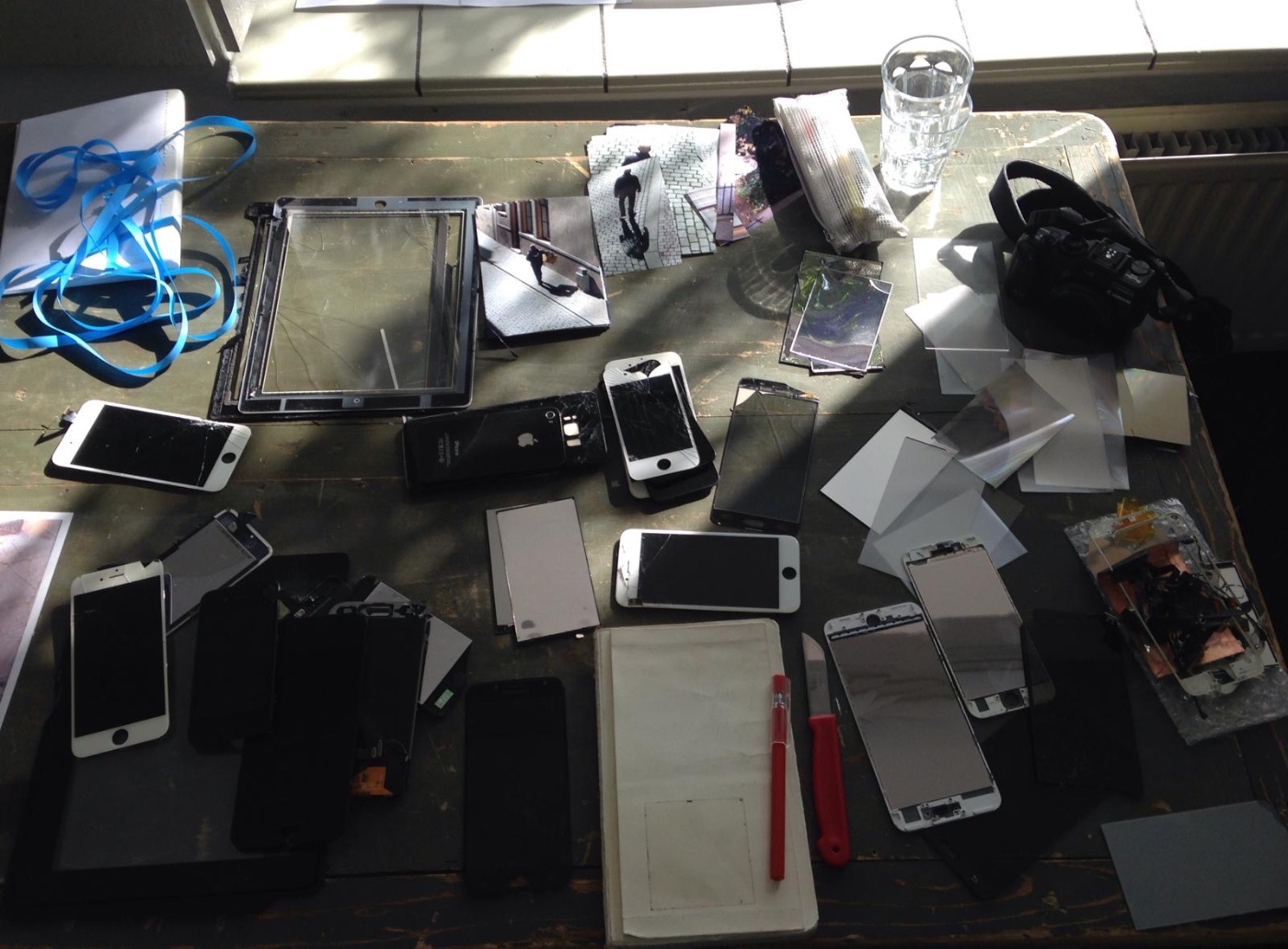 Strange when it’s over

As the interview started, the doorbell rang and Reinout van den Berg, curator for Breda photo and organiser of this residency came walking in. He joined the table and the interview.

Roel: Before I came here I was looking at your work online. It’s extremely varied. What is it like to be in such a small space with six other people who are doing completely different things?

Alix: It’s good. We work here, but we stay in a monastary. So we do get different places, which is good. We can choose where we want to be at any time. But it’s not like it’s hard for us. It is like we’ve known each other for a long time already, but it’s only been four weeks. It is a different friendships from the kind you have at home, but it functions and you get a feel for each other.

Iryna: There’s a lot of emotions, because you’re always together: in the good and in the bad moments. And it has made us a lot closer, and also more tolerant. But I want to respond to you pointing out the differences between us. The theme of Breda Photo is technology and the impact of technology and so that’s what we are thinking about during this residency. In our times there is such a sense of things being hybrid, individuality itself being hybrid, so differences between us don’t matter a lot. It’s not a good question. Our differences, our products, out things—it’s not the point. 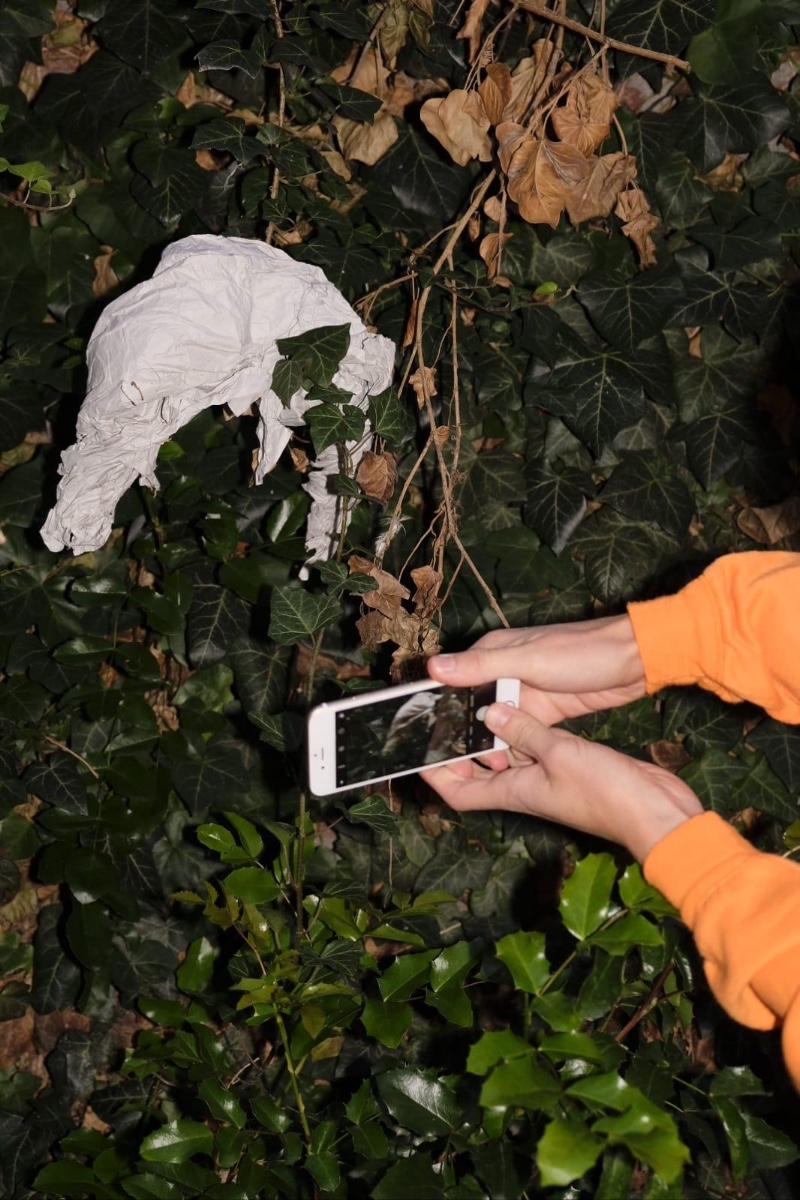 Roel: What should the question be then?

Iryna: How do you find a way, or how to think and rethink things under these communal conditions, this living and working together. It’s about what we can put on the table together and discover how we are thinking. It can be a mirror, because with technology, everything is becoming more and more personal.

Miguel: It’s also about, I think, looking at the working processes of other people, because they are sometimes more interesting than the way you’re doing things. Because that’s the thing that differs most from person to person: the way you work and interact.

Iryna: Yes, and there’s is this super sharing that we all experience, where I am taking ideas from Miguel, or Eva and they from me.

Eva: It’s actually the living together and the interactions with the other persons that is the most valuable.

Reinout: For us the end result is not the important thing. For us it’s a chance to grow. Two years ago we had a photographer who started as a resident here and now he has an exhibition at the Stedelijk Museum Breda.

Alix: I think we can all use what we did here as a starting point for new projects. Sometimes it feels a bit forced—that you have to make new work in these two months, but it’s a really good foundation to really develop something.

Eva: there’s also a chance for interaction with other people, both professional and nonprofessional, making you think about your work in new ways, which can take you a step further. 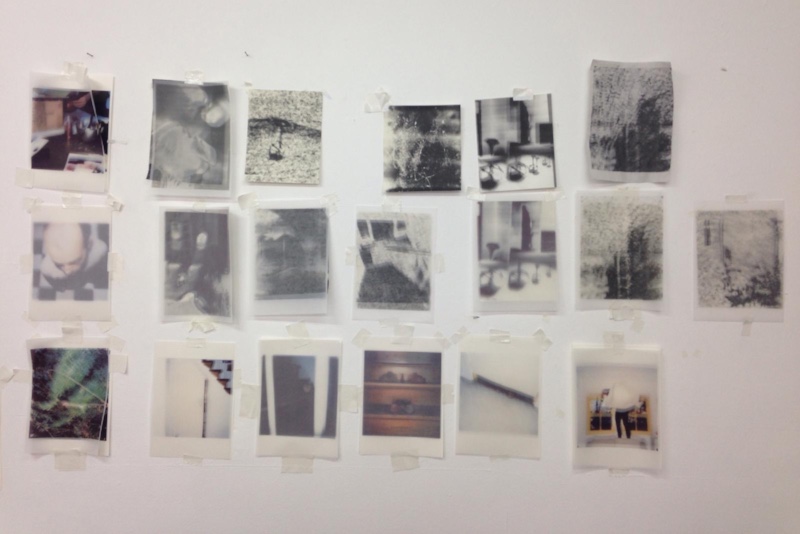 Roel: Maybe it’s not so much about how well you fit together on paper, but just about different people getting put together and having to make things work, and that’s where interesting things can happen.

Iryna: Yes, because, like I said, everything is supposed to be hybrid, but in the real world when you put different fields together, or two things that can’t connect, eventually something comes out, but it will take a lot of time, and that is why I think it makes sense that the residency is like this.

Miguel: The differences can also highlight something that fits within the topic we’re working with. 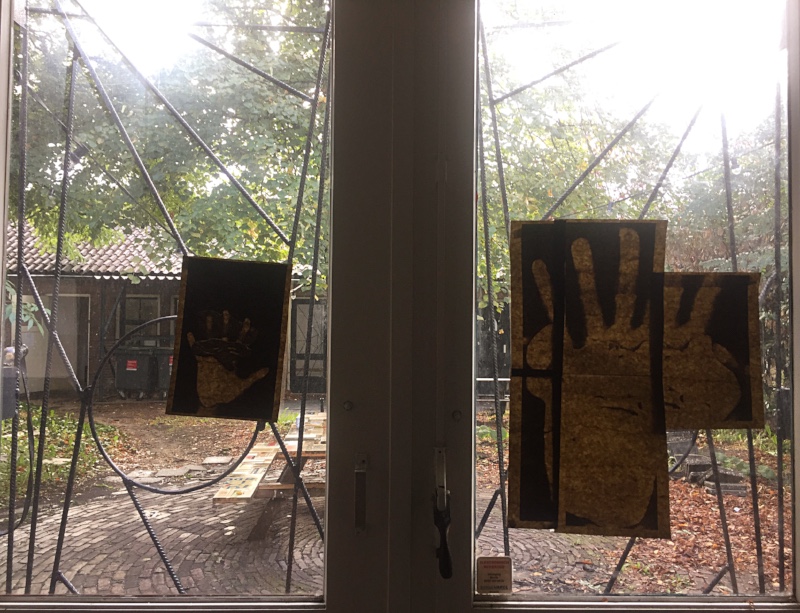 Roel: One of you mentioned professionals giving feedback earlier.

Alix: Every monday we have masterclasses. So somebody will come and do a talk about all kinds of different topics. For example: next monday somebody is coming to talk about presentation. On tuesdays we have artist dinners, we eat together and then do an evaluation of each others work. For us it’s an opportunity to get to meet all these people we normally wouldn’t and get free feedback.

Iryna: For me it’s the most stressful thing. And I’m not necessarily talking about how we do it here, but in general. Inside of museums and institutions there’s always this feeling of competition. Like, you have to post every day and talk about yourself, defend yourself and you always have to wonder whether you were at your best today. I’m trying to figure out how to not go along with this too much, to feel that you’re calm and so that you can just work. And I think a little community like we have here can create some freedom from this competitiveness.

Eva: I had these feelings in school also, these feelings of high competitiveness. I think there’s a lot to learn from the masterclasses, but I can understand the way you feel. That feeling when you have to stand in front in your work and explain and everybody is listening quietly. At those moments it’s like everybody is alone.

Miguel: I think this also has to do with your expectations of the residency, because when you come here with the idea of: ok, I’m will be here with seven people for seven weeks sharing a workspace, you might expect a lot of collaboration, or having a lot in common with each other. And it’s not like that’s not happening right now, but it’s in the little things. At the same time the structure of the residency itself still feeds the individualistic path because the artist dinners and the masters classes are still about your views, your project, where do you come from.

The group nods in agreement. There’s a pause. Then Miguel continues. 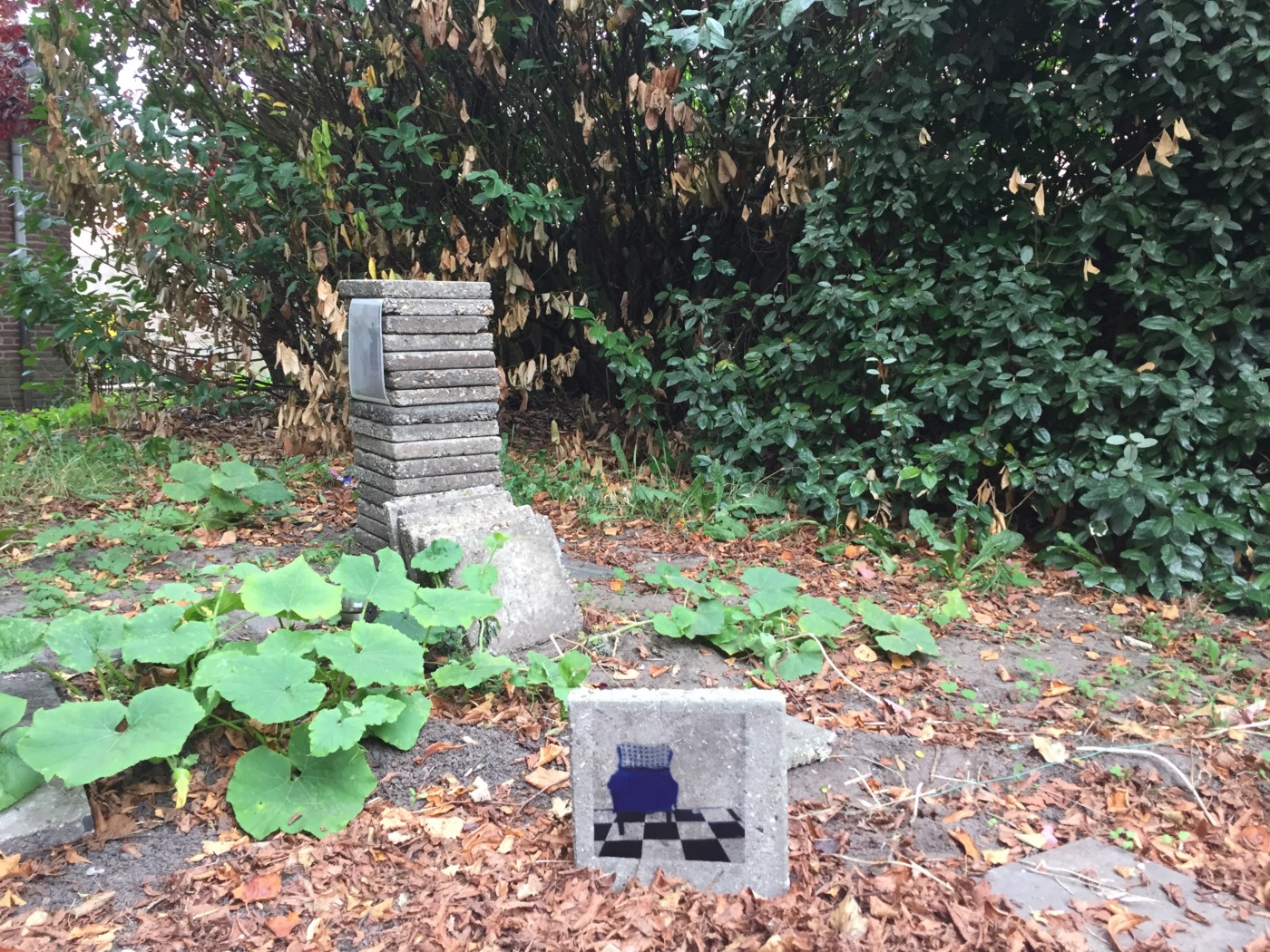 Miguel: But it’s a choice also. Nobody is actually told that this is how we have to do it. We just did. If we want to get together and do a single presentation that’s also possible. We never really discussed this, and it probably comes from the habits that we have from school where you have to defend your work and stand for yourself. That’s where that comes from, but we can change it next Tuesday.

Iryna: That way of working just doesn’t make sense to me. It’s not like I’m a rebel, but that individualistic way of working just doesn’t fit with how I think, with what the work is for me. And it makes me feel useless, because you’re working all the time and you built something together and then, when it’s time to show, all this work vanishes. And it makes me wonder about why I should be here? Why should I try to do something in the end if what I’m really interested in remains invisible? The collaborations, the friendship, all the doubting that happened, the moving things around an shifting them, trying something new. All these things are the atmosphere I’m creating.

Eva: And then you present it and it feels like it’s nothing anymore. All these conversations and doubts have become invisible. Like that? I understand now what you’re saying.

Iryna: Yes, but it also feeds into this idea of being in a competition…

Alix: You think there’s a competition between us?

Iryna: No, no! I don’t mean between us, but I’m talking about this form where you have to defend and explain your work, where there is this personal responsibility—it’s individualism.

Alix: I see. I had the feeling sometimes, but this was when I was still in school, where you were competing with your classmates. I don’t have the feeling now at all.

Miguel: But Iryna is not talking specifically about this, are you? You are talking about the culture.

Iryna: Yes. And now we’re here together and we’re thinking together and discussing together and we help each other. We collaborate. And this is already work. But then when somebody from outside comes, we are just presenting our work separately. That doesn’t make sense.

Alix: But how do you make that visible? We are here collaborating for seven weeks. The person coming by will be here for an afternoon or an evening.

Eva: Maybe you make it visible by staying with each other when the work is presented. Maybe. I don’t know. 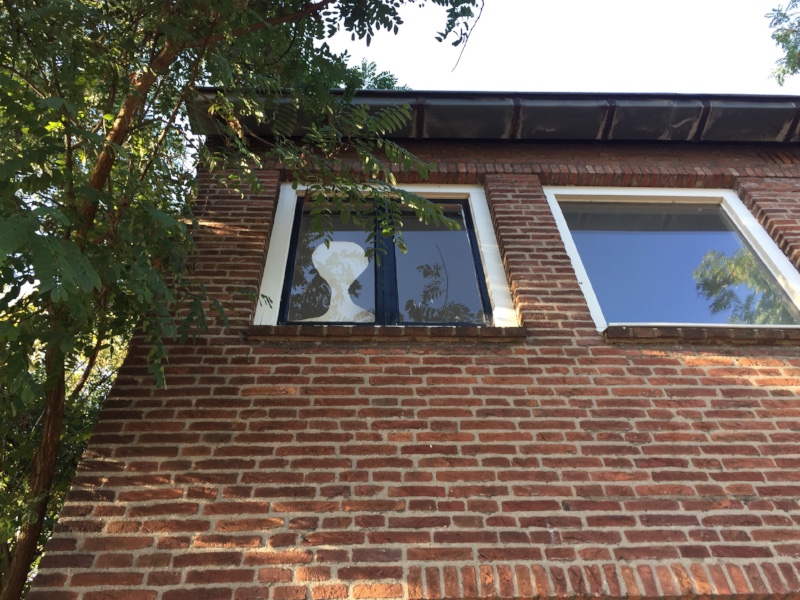 Roel: I think I have to cut it off here. I’ve probably already have more dialogue then I can use. Is there something that hasn’t been said that needs to be said?

Alix: It will be strange when it’s over

Miguel: Yes, it will be strange when it’s over. Since we arrived the feeling of time has completely changed. It became super flexible. After the first weeks it felt like we had been together for a year, but now it’s accelerating again; we’re getting closer to the end much faster. So it’s also time that’s completely messed up in this whole experience

Stationslaan 111, Breda, Nederland
For the last seven weeks, seven photographers have been working at Witte Rook in a residency organised for Breda Photo. Five weeks into the program I dropped by to interview them and ask them what they had been up to. Unfortunately not all seven of them were present at the moment, so I ended up speaking to:

Praktijk
Gerelateerde items:
interview:
Q: Can the Circle be unbroken? A:— A conversation with Helga Jakobson