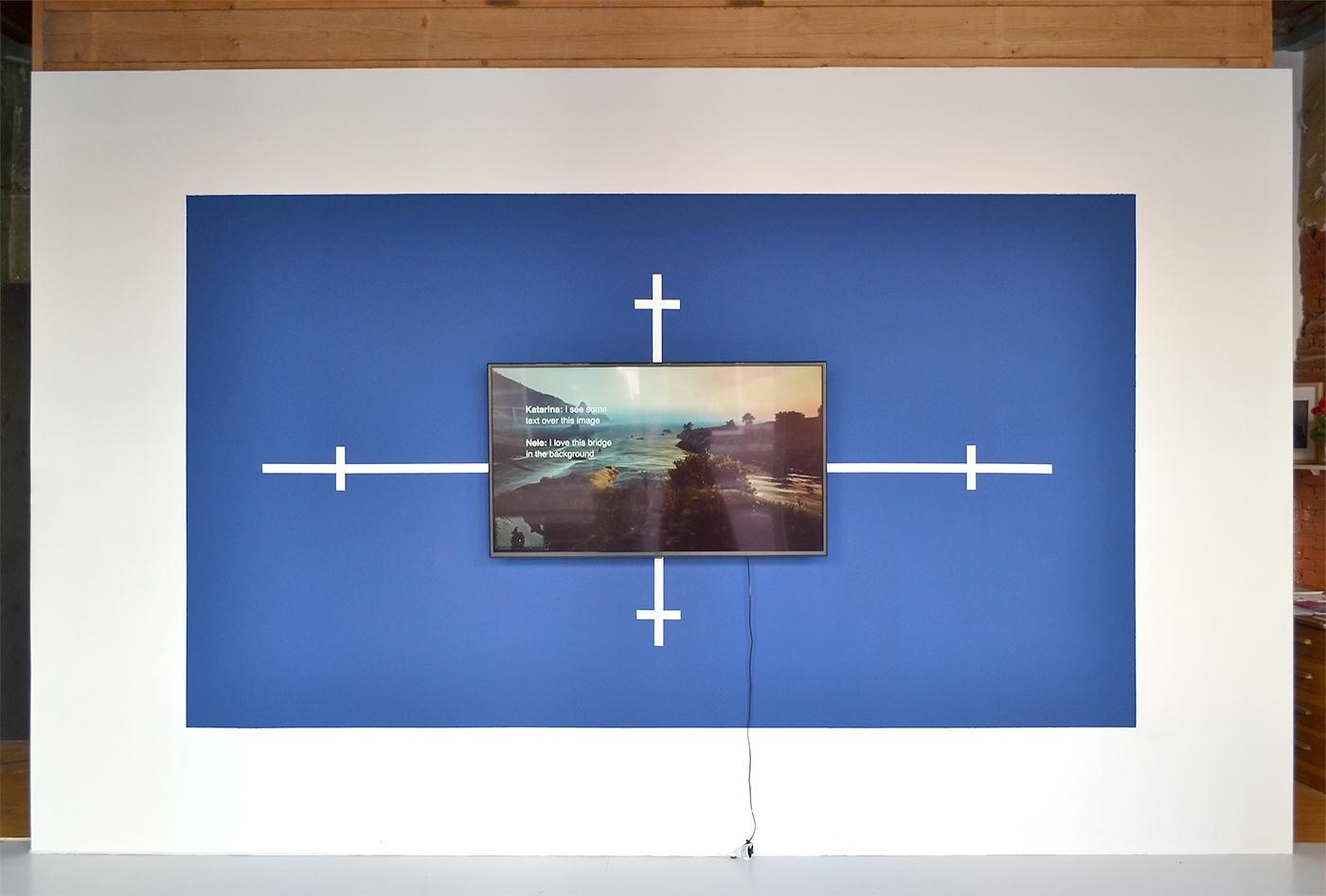 In the summer of 2019 Nele Brökelmann, Katarina Petrović and June Yu came together to talk about their shared interest on the origins of things. A year later they found themselves in the production phase for their first exhibition in Middelburg at ruimteCAESUUR curated in collaboration with Witte Rook. Nele, Katarina and June’s experimentation with collective writing, researching and making, as a proposition and training ground for multi-authorship, had taken such a substantial role in their artistic practices that the three decided to take a leap into materializing their ongoing conversations and thought-processes in the form of a presentation. The first manifestation took place in July and August of 2020. The exhibition consisted of two animations, a video essay and research materials. During the opening a collective soundwalk was performed with the present audience, which is still accessible at the link here. For the finnissage of that exhibition, on Sunday August 23rd, Nele, Katarina and June extended the conversation in a live stream artist talk with Hans Overvliet (ruimteCAESUUR) and Esther van Rosmalen (Witte Rook).

The following text is a screenplay for six characters (three artists, two curators, and the steamboat), extracted and adapted from the transcript of the artist talk.

In Four Dimensional Space — Now
Nele, Katarina and June are in a multilogue with the collected materials and events as they leap into their second exhibition at Trixie, the Hague. It is now the end of September 2020, where has the [蒸汽船] Steamboat been and what did it pick up from it’s stop in Middelburg?

Recalibrating – Artist Talk, August 23rd 2020
Boarding characters pulled together by string formations.
June with a mind in the clouds speaks the break. –

The steamboat enters the scene as a scribble.

Steamboat (O.S.) I sailed through the veil of mountainous vapor.

Katarina wants to talk about talking.

Katarina (O.S.) The process of becoming familiar with each other’s perspective was left open and it was to yet be seen where that might lead us. We could support each other by talking, but we could also, by the same token, build something together so that other artists with their processes and practices can take something from our exchange. The longer we are in conversation, the more we realize that we act as a group, but also still as individuals. We are thereby always oscillating between expressing our own views and the view of the group.

Talking through language, a thought important to mention according to Nele.

Nele (O.S.) Our only mutual language is English, not one of us speaks the others’ mother tongue. Therefore we are from the very start of our collaboration in a continuous state of translation. It enriches and feeds the dynamic between us. 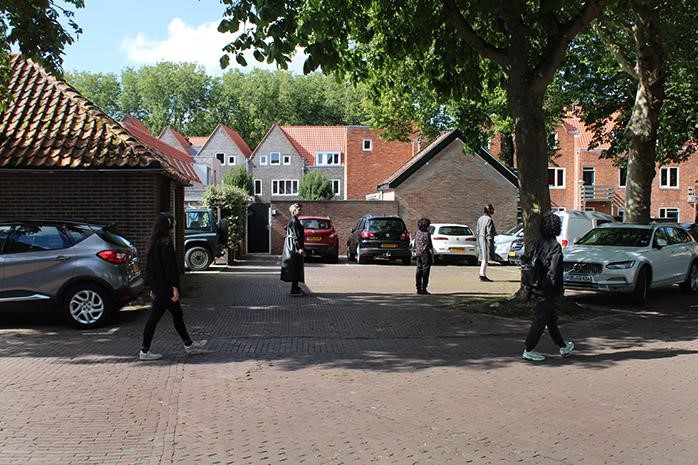 Image: Giel Louws, from the collective drift during the opening

Fast-forwarding
An afterthought yet to emerge that perhaps necessarily overlooks the history of everything that has happened, an afterthought in conversation with the speakers, who at this time do not know exactly what is to be said in the next moment.

The knowing not knowing, speaking yet not knowing exactly what to say captures June’s attention.

June (O.S.) This doubleness in that we are observing, something growing amongst the three of us while it unfolds is, in my view, the poetry. It is the consciousness in observation of itself, not being able to capture itself. So it really is us not being able to capture this thing that we are trying to build. Yet, we are giving it an enormous amount of time, attention and care – that to me is the poetic aspect. That speaks to me.

The knowing not knowing creates a problem with stability and trust.

Katarina (O.S.) I think what we all definitely share is a really strong associative method of going about things. One translation is immediately a hundred more translations. This is sometimes a really good thing and sometimes not.

Laughter fills the space between the characters.

Hans (O.S.) Your mountain is not my mountain, but I will be vulnerable – I have to. I have to be at my best to speak this other language.

‘Are you always comfortable on a wobbly boat?’, thinks and manifests the general mood. 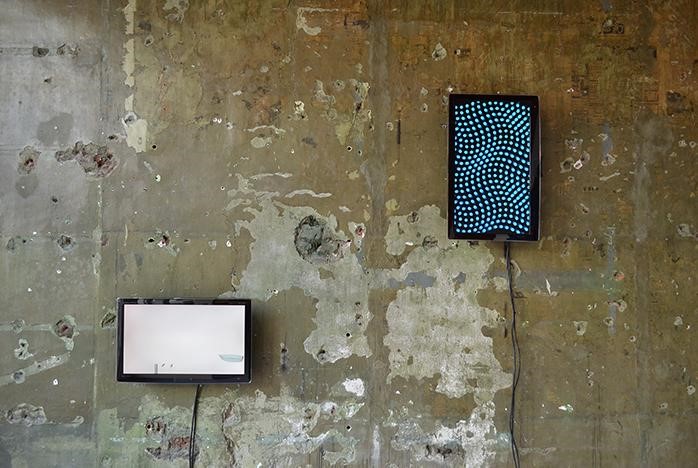 The things that form stable string formations and support a continuous existence gradually take shape in the words being spoken.

June (O.S.) When we talk about the collaboration, where the collective or multi-authorship comes in,  you put yourself in front of two others. You not only have to become vulnerable or transparent, but you also have to give your best, you have to strive for a new you.

Hans (O.S.) Even in the word itself: collaboration, there is labour. Labour originating from Latin is ‘giving birth to’, a very positive thing and at the same time one of the most painful things you can imagine. Ambiguity is ingrained, but yeah, we try to avoid that. [laughing]

Katarina (O.S.) I never thought about that, that we are in continuous labour. [laughing]

Esther (O.S.) Tell us about your labour: How does it happen, coming to something like this? What lead to this?

Katarina (O.S.) I think we are asking the same question. 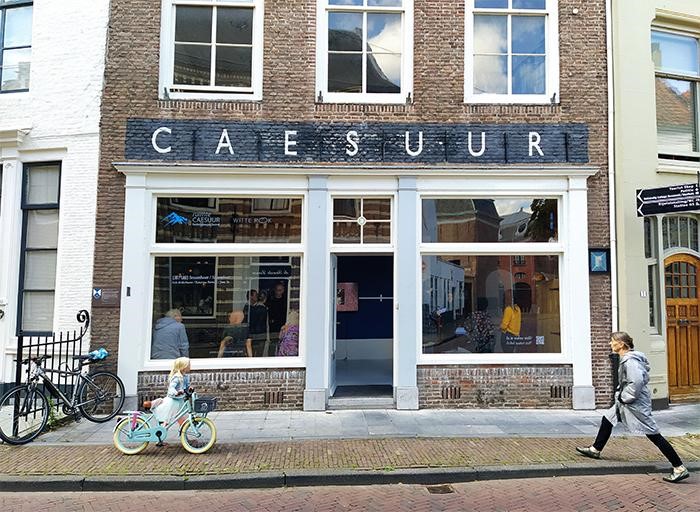 A cycle is formed as the question returns to the inability of being captured or observed. But we will move on, as the boat leaps across the waves.

Esther (O.S.) You are talking about doubt and interference, on the other hand you work together. That makes you stronger, makes you help each other, so there is less doubt. To me, as I look at you, you don’t have a lot of doubt because you work together.

The boat comes back into motion, which redirects the attention to the notion of care.

Katarina (O.S.) It adds some kind of support that you can ask this group that you work with to think intimately with you, but it doesn’t make anything less of a doubt.

Nele (O.S.) We talked about if we wanted to become an institution or stay away from that. And this constant induction of doubt, which keeps us mobile but also on unstable ground, is what will help us keep learning and not get stuck in a certain agenda.

June (O.S.) That is also where the steamboat comes in and not a steam-train. Because a steamboat navigates a sea that is full of turbulence, change, and uncontrollabilities.

As the boat heads off into the new new sea, it leaves a trace in the mind, recalibrating its path with every wave it encounters.

Esther (O.S.) You are thinking about the steam in steamboat, mentioning steam as a by-product, but it’s not irrelevant. That is the funny thing – something that does not seem relevant becomes more relevant, not in the notion of the steamboat but in the way you speak about it. The steam is the most important thing.

Katarina (O.S.) The same approach is an attitude of care. You begin with what is of the essence of being human, really, and nurturing that humanity in us, at this age. It is a turn of care and making kin, as Donna Haraway put it – in this reliance that you put in the other, you have more of a kinship, more of a family binding. I personally totally agree with Haraway, I can only foresee that kind of an approach as a constructive way to look at the future. Because if we are not capable of creating such relationships, well – what are we capable of doing then?

The mist is rising from the mountainous landscape, overtaking the scene.

Lange Noordstraat 67, Middelburg, Nederland
In 2020 Witte Rook and ruimteCAESUUR offer a visual perspective on the role of the internet in artistic practices while interrogating the value of offline exhibition spaces.

[蒸汽船] Steamboat is a longterm exploratory project of three Artist-Scientists: Nele Brökelmann, Katarina Petrović and June Yu. We came together under a loosely defined interest and wonderment about origin. As Bernard Stiegler said: “The question of the origin is what constitutes the whole of human individuation, that is, the whole of desire: the whole of human being insofar as it is essentially desiring.” (Acting Out, Bernard Stiegler, Stanford 2009, p. 7). The search for origin viewed from each of our different perspectives is linked by the essential human quest for becoming.

at another time stamp

these are guidelines for a set of operations

directed towards a morphology

between shapes seen and unseen

In our work we are interested in the nature of support structures, from the cosmic sea and the world turtle to digital windows and google search results. In this work, the soundtrack is designed to take you adrift with us. It aims to open up space for exploration of your immediate surroundings and/or your inner landscapes.

In 1956, Guy Debord described “dérive” as a strategy for movement quite different from a journey or a stroll. Characterizing it as a playful, constructive behaviour and awareness of psychogeographical effects, in which one lets go of the usual motives for movement and action “and let themselves be drawn by the attractions of the terrain and the encounters they find there.”