On a 49 square meters patch of grass in the middle of the Zaartpark in Breda, a large banner has appeared. It shows the picture of a man in a white shirt with a pink panther headband. “Nice Ahn!” is written in big orange letters above his head. At the bottom of the banner, in the same orange letters, another short phrase reads “Nice Artist!”, with a phone number right underneath: +31) 06 45 00 97 57.

The large banner has been designed and placed by Ahn Sung Hwan who was the Artist in Residence of the 49 square meters at Witte Rook this summer. Every season Witte Rook invites an artist to create a project for the 49m2, which is in itself a long-term research project into public space set up by Dutch artist Gerrit-Jan Smit in collaboration with Witte Rook. The artist is invited to observe the space in relation to the environment, the passers-by, and their own practice. As such, Ahn’s residency has resulted in the placement of the considerable billboard which disrupts its surroundings, advertises himself and questions contemporary survival strategies. Charlotte Fijen met with Ahn in the Zaartpark and spoke with him about his project and residency at Witte Rook.

Breaking through the ideal
Upon entering the Zaartpark to meet with Ahn, I am a bit afraid to pass the 49m2 without noticing it. 50 meters into the park I realize I have worried for nothing because Ahn’s billboard is very visible, actually it’s so big you can’t miss it. Standing in front of the billboard with Ahn, he starts telling me about his project. The main motivation to place such a sizeable banner on the 49m2 grass patch is his wish to disrupt people’s ideal image of nature. It strikes Ahn that we often have this ‘ideal’ image in our head when we think about art and nature. A park, for example, should have some nice lawns, plenty of trees and beautiful meandering footpaths. By placing a huge billboard inside the park, this ideal image is broken, shifting focus to Ahn’s photograph rather than the peaceful green surroundings.

The disruptive power of Ahn’s intervention in the park already became apparent on the first day when he was still busy installing the billboard. Axel Coumans, the artist in residence of the 49m2 before Ahn, did not realize a project on site which left the place unmaintained during spring. Consequently, the grass was tall, and weeds were growing everywhere. Ahn therefore felt like he had to cut the grass a bit so that it wouldn’t interfere too much with his own project. Funnily enough when he started to cut the grass, a woman passing by came up to him, worried about him destroying the artwork. She was angry and wanted to call Witte Rook to report Ahn’s ‘destructive’ behavior. Ahn still has to laugh when he tells me about the incident and explains that he is actually really happy with a response like this. In fact, reactions like these are exactly what he hopes for, he wants to break people’s habits or thought patterns with his work, which clearly happened when the woman got angry about cutting the grass.

Creating incidents, provoking interactions, or making a phenomenon is currently at the heart of Ahn’s artistic practice. Ahn tells me that when he started thinking about his project for the 49m2, he wanted to create a big object, or a big installation combined with a phenomenon. He says: “My method is always wanting to make some incident or phenomenon or something, these days I’m really focused on this kind of thing. In my past work I did some sort of performance, but it wasn’t really a performance, it was more like an incident or phenomenon. So, I always focus on how to make some phenomenon with some object or some symbol. And this time I also wanted to make some big object of big installation but also a phenomenon. How can I do that?” The answer to that question is the phone number which is written on the billboard. It is a way to create interactions or incidents with people by giving them the opportunity to respond to his work. Even though his friends worry he might get too many angry messages, Ahn himself hopes he will receive them a lot. “When someone calls me or texts me, at that time the work is truly finished”, he explains. The voicemail of a Dutch man who asks how long that photograph will stay there because he and – so he says – many other people are annoyed by the billboard for they think it’s hideous is therefore not insulting to Ahn but rather satisfying. For him, the role of art is to ask questions, to provoke reactions, to question expectations.

Advertising oneself and survival strategies
Apart from disrupting the peaceful green environment of the park, Ahn’s billboard also has another function: to advertise himself as a nice artist. A nice artist to Ahn is a critical person, someone who asks the questions and allows the audience or the other person to make their own answer. However, in the contemporary art scene, there are certain hot topics that continue to dominate the debates and artists who are working on these topics – think about gender issues, climate issues or decolonization – are usually defined as ‘nice artists’. Ahn feels like he does not relate directly to one of these issues, he says: “I don’t want to ignore their thoughts or opinions, but for me, I always mention that I am a really normal person. I have no specific thing, I am a man, not very tall, not very rich, not very poor, just a regular guy. So I am thinking how can I be a nice artist because I don’t tie into the contemporary narrative of a ‘nice artist’.” Advertising himself as a ‘nice artist’ is therefore part of Ahn’s survival strategy as an artist. “I just really want to survive as an artist but sometimes I don’t know how to do that, and therefore I made an advertisement for myself. So I can let people know that I am a nice artist who is trying to set foot into the art world without being able to connect to all the current hot topics of the contemporary art debate.” 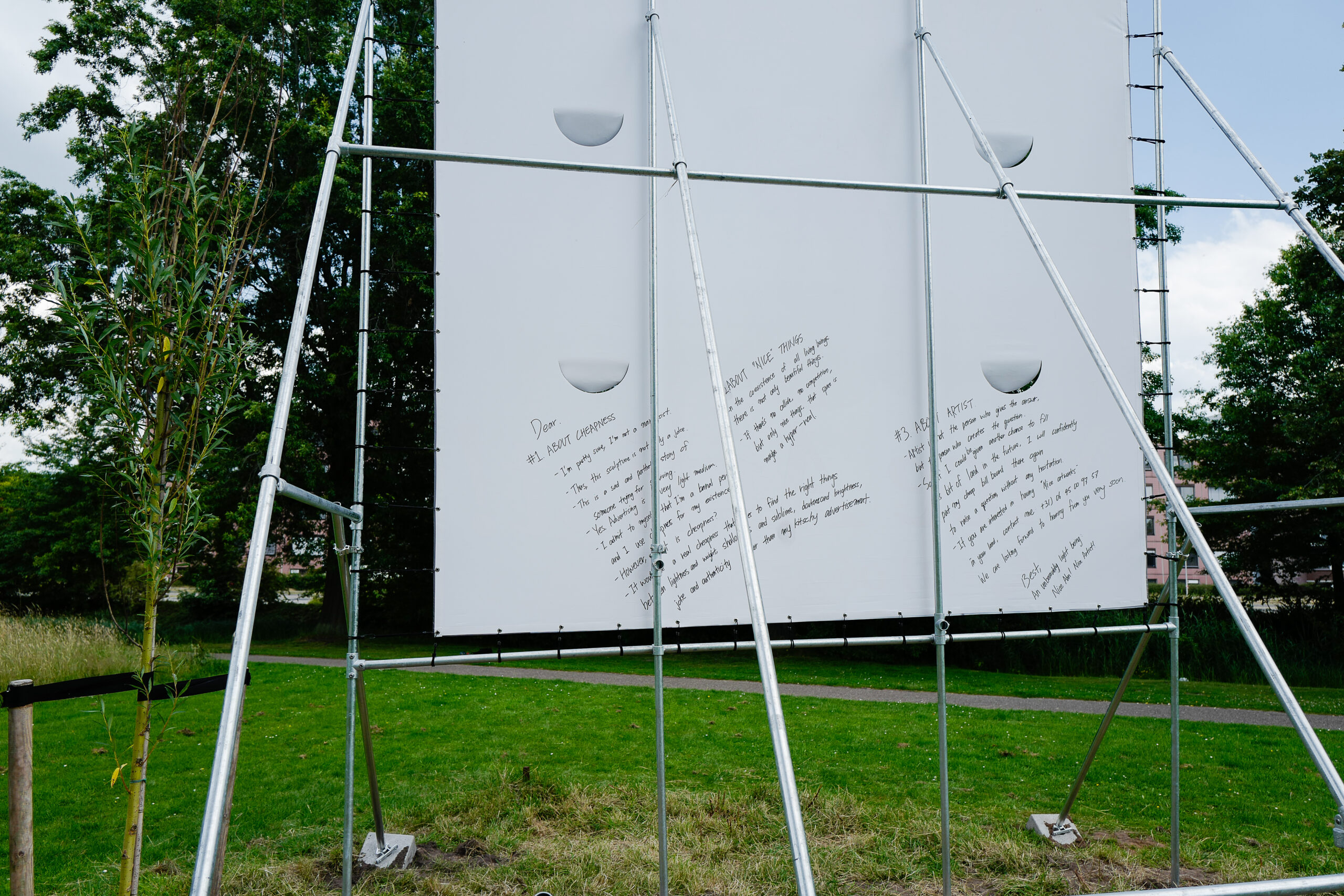 On the back of the billboard Ahn wrote three small texts that explain his intention with the artwork. He did so because of the angry reaction of the passing woman, giving people the opportunity to read about the project and the idea behind it and to reflect upon it. The first text speaks about ‘cheapness’ and starts with explaining that Ahn is not a narcissist for adverting himself. Instead, it is quite sad because he struggles to become a famous – ‘nice’ – artist, it is a struggle for surviving. When asked to explain the cheapness more in depth, it becomes clear that Ahn mainly refers to a ‘cheap attitude’: only looking at one side of the story, which is often the easiest and least confronting attitude. The cheapness of their reluctance to look any further is something Ahn wants to confront them with. Ahn’s second text ‘about nice things’ speaks about a similar wish to challenge the idea of a world where only nice things happen, which once again ties into the ‘in your face’-character of the billboard. His aim as an artist is to ask questions. As Ahn said before: “The artist is not the person who gives the answer, but the person who creates the question.”

Almost at the end of our conversation I ask Ahn if he had any expectations about the project and whether there is something that he would like to add. He replies that he expected more people to send him angry messages about the banner, but in the end not so many people did. Also, he wants to stress that he is not a narcissist, people ask him “do you love yourself this much to put up a billboard with your own photo?” yet he insists this is not the case. “My face is kind of material, it stands for ‘an individual’, not for Ahn. It’s a picture of a normal person, there is no gender, nationality, religion for him.” I ask if it could then be anyone on the picture and as a true nice artist Ahn laughs and says “I think so, it is possible, totally possible”.

In addition to this text, Ahn also created his own observation which contain some responses he received to his work. You can see/hear those here: 49m2 (observation)

About 49m2:
In Zaartpark Breda you can find a demarcated piece of land with a surface area of ​​49m2, where the municipality of Breda will no longer carry out maintenance for the next 20 years. According to the agreement concluded with artist Gerrit-Jan Smit, anyone can intervene within these 7 x 7 meters, except the local government. Every season an artist is invited to observe the place in relation to the environment, the passers-by and their own practice. In Fall 2022, the seventh year of this project will commence with artists Urša Prek (Fall), Anne Leijdekkers (Winter), Britte Koolen (Spring) and Penelope Cain (Summer), followed by the new Fall residency of Heidi Vogels.

Openbare ruimte
In Zaartpark Breda you can find a demarcated piece of land with a surface area of ​​49m2, where the municipality of Breda will...
Door: Gastauteur
Bekijk alle Artikelen