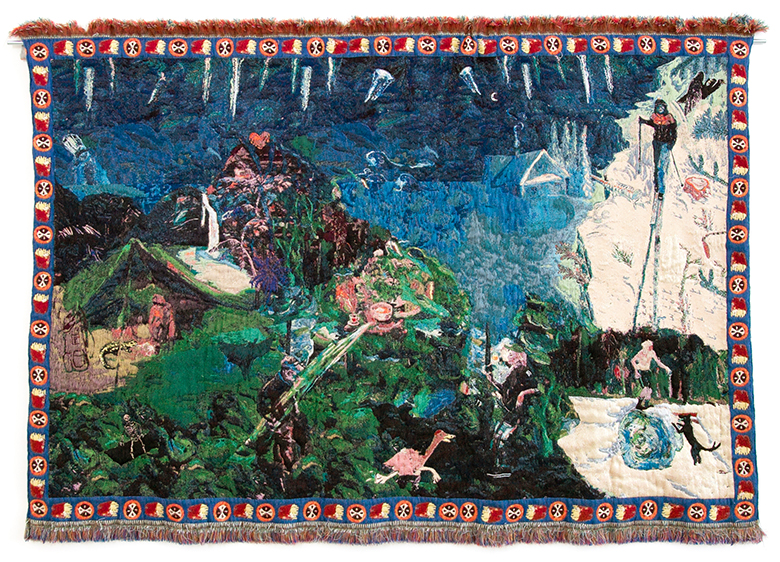 Let the wild spirit come and change you

It’s been one year since our baby was born into a family of two artists. My husband Martin Gabriel and me had decided that we wanted to take hem everywhere with us because it is our belief that the baby should be fully incorporated in our life, although this can be challenging.
Already before B was born we knew that we want to use a baby sling to carry him and designed our own baby wraps. It felt very natural because I use fabrics and weaving in my artistic practice. As time passed by we also developed this into an artproject. As a reaction on the sentimental images on babytextile we set up the company mothertomother.cz to infiltrate in the babybrands to cause some change from inside the system. We did this for fun, but also for our baby to surround him with meaningful patters in respect for the adult soul. We carried B along everywhere but not always in the wrap. There were periods when he enjoyed it very much but there were also moments when he absolutely hated it. I never want to force B to do anything he rejects because I believe that he has a good reason for it. 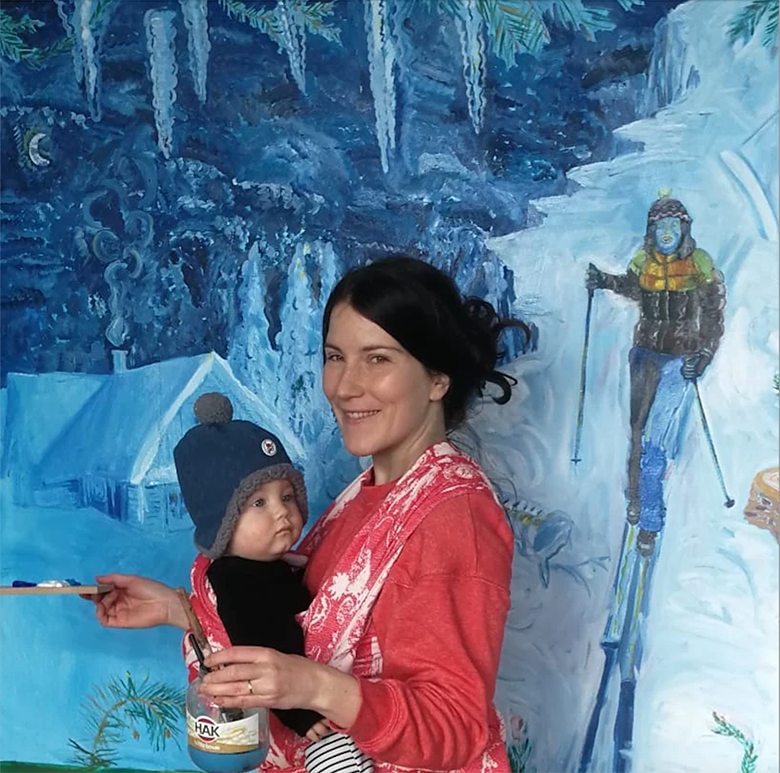 We shared the care and it was quite a ride in the first months. B had difficulties sleeping and so our life has turned into a very crazy schedule, some days I only slept for a few hours per night as I needed to hold him in my arms to make him sleep. For a month or two, we were waking up at 3 am and I walked in the streets at 4 o’clock. I took photos on walks and wrote down the dreams for the moment I could work again because dealing with motherhood was so life changing. It took a while to be able to communicate with the outside world, reply on e-mails and even start making art again. Martin had to work for two days besides making art because there was a need for some income. We were able to manage our budget and this was important because I didn’t have anyone else to help me because our fellow artists did not have kids so early and our family lives in the Chech Republic. I was even able to make new work, a series of ceramic tiles for a show and I painted over 40 images mainly while B slept in my arms. I learned how to manage my time and how to do things besides caring for B like making new paintings and do several shows.  It was even quite nice most of the time, I was supported by a project space run by another mother-gallerist who already has a kid understood my situation. I was invited by other artists to co exhibit. During studio visits and meetings a baby creates a sort of community feel. It takes away some of the need for perfection and creates some distance from professionalism.

While learning a lot about myself I also started to realize how much motherhood is overlooked by the non-mother part of society. We talk about feminism and equality but the impact of giving birth and motherhood is often overlooked. Daycare and artificial feeding are ‘good ideas’ that can solve things and equal the time women can then spend on their carriers. But at what cost. Our society is expecting that one should be as productive as possible. For me it’s about giving everybody the same chances. I want to be a part of the first years of my life, but also to keep doing what I love and what I believe is my purpose in this world.

There was a situation where I felt quite punished. In the beginning of my pregnancy I received funding from an organization. Part of the funding was a studio visit by curators, but due to covid-19 everything got extremely postponed and my situation changed. When B was about 3 months old they contacted me about the project and asked if I still wanted to participate. One of the conditions was to partake in everything they planned to do. I didn’t want to miss the opportunity and thought that it would be possible. I expected something like one visit per day for the duration of one week. Two months later, when I received the schedule I knew it was not going to be possible to participate fully. There were 1 to 4 visits per day and also an eveningprogram. This would normally still be a bit overwhelming for sensitive artists, but I knew that me and B will only have energy for 2 visits per day. The institution also knew about my situation, so I hoped that they schedule less visits. When I asked them to reduce the visits, they got pretty mad at me and didn’t want to help at first. After exchanging some e-mails they agreed with some compromises. I could participate on my own terms which was good. But what made me sad was that they told me that if they knew before they would exclude me completely. The lack of understanding of my situation frustrated me. I could lose the opportunity to present my work without consideration that I was doing it for the comfort of my baby who is the future of our society. No wonder that people nowadays postpone having a baby to the absolute limit or have none. Artists especially already have a difficult time and being a mother artist is ten times as hard.

After that I was selected for the final round of a residency. The jury had a question for me about how I had enough time for this residency considering the care for the baby and lack of sleep. I was quite clear that I would bring the baby along. And I was rejected. The explanation they gave was that they selected people of who they think are at the right point of their career. But wat is the right point in a human life. The pressure I experienced for such a separation is a shame, because babies can bring a lot of natural energy into an established, distanced and sterile system. A system that is not aware of the need for that. Most of the recidences have no family housing or budget for families even though they accept people in the age when it’s most common to have a baby. There is so much great funding possible in this country. I wish is would also be possible to receive funding for artist parents.

I think babies have a wild spirit that was not domesticated yet. I know some call this egoistic behavior, thinking that it’s just something that has to be trained. We don’t think so. In fact we think that the less teaching and training B is subjected to the better. Babies are a complicated topic that’s at least being discussed here (in the Netherlands) and I can openly speak and write about it. Being in the Netherlands also allowed Martin and me to have a baby while both being artists, it’s not the easiest thing but it is possible. 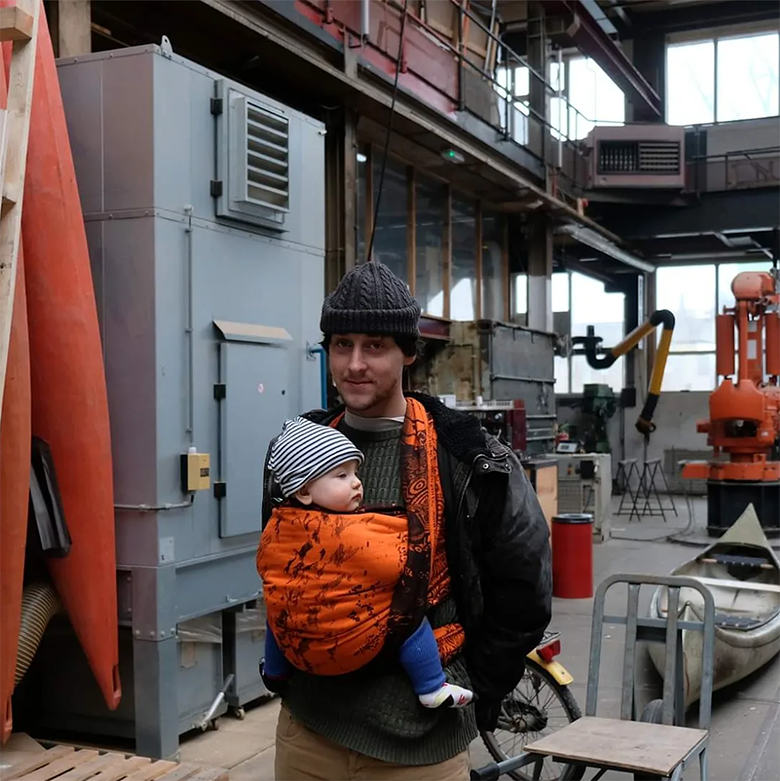 Den Haag, Netherlands
Vrouwenmantel Art Research group invited Kateřina Gabriel Konarovská to share her story about her artistic practise and the role of care and motherhood.

I'm a painter and also working as a textile artist in Den Haag for the past 10 years. I see painting as a modern reaction to the speed of our urbanlife. My inspiration comes often from mapping night dreams messages and how this is overlapping with day time experiences. I tend to look for a balance between nature + tradition and technology + mainstream life to create a place for human beings here and now.

ouderschap in de kunst
The lack of maternal representation within arts and culture has been at the forefront of my artistic research for over ten years. ...
Door: Vrouwenmantel Art Research GroupGastauteur
Bekijk alle Artikelen